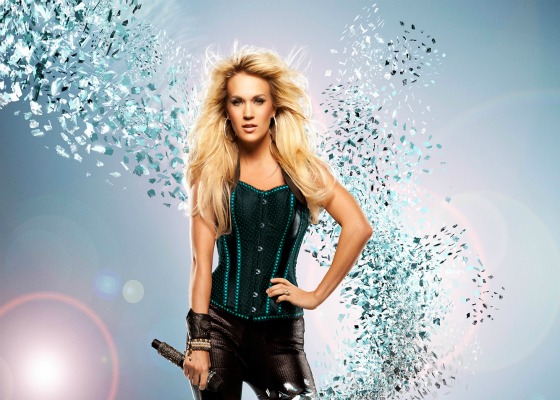 “Blown Away,” the title track of Carrie Underwood’s fourth album which has held the #1 position for five consecutive weeks on Billboard’s Top Country Albums Chart, has been selected as her next single.  Impacting country radio on Monday, July 9, “Blown Away” has already amassed nearly 200,000 downloads prior to its official shipment as an airplay single, and, as reflected by media activity, is the “top fan choice for next single.”  Millions have already seen Carrie perform this dynamic song on two primetime television programs, “American Idol” on May 3 and the “2012 Billboard Music Awards” on May 20.  Naming it “The Blown Away Tour,” the country superstar recently announced she will headline her third arena tour of North America, starting September 14 in Manchester, New Hampshire, and continuing through December.

This week, the Arista Nashville promotion team will approach country radio programmers with the details on how to win a Private World Premiere of Carrie’s “Blown Away” music video.  The prize package for this nationwide contest includes a “red carpet” event for a group of listeners in the winning station’s market which will be attended by Underwood.

“Blown Away,” the second single release from Carrie’s 19 Recordings/Arista Nashville new album of the same title, was written by Josh Kear and Chris Tompkins. Kear and Tompkins co-penned her smash hit, “Before He Cheats,” which held the country radio No. 1 for five consecutive weeks and was certified Triple Platinum by the R.I.A.A. for sales in excess of 3 million downloads. Among the music critics’ raves of the title track “Blown Away” is this Billboard review: “Mark Bright’s brooding, atmospheric production and Underwood’s bold performance elevate this cinematic tune to an instant classic. When the girl shuts herself in the storm cellar, leaving her alcoholic father passed out on the couch in the path of a twister, you can almost feel the wind.”

On the heels of her “most wins” at the “2012 CMT Music Awards” for “Video of the Year” (“Good Girl”) and “Collaborative Video of the Year” (“Remind Me” duet with Brad Paisley), Carrie Underwood is also nominated for “Choice Female Country Artist” at “Teen Choice 2012” which airs Sunday, July 22 at 8pm ET on FOX. Fans ages 13-19 can vote once each day per category for their favorite nominees at www.teenchoiceawards.com.