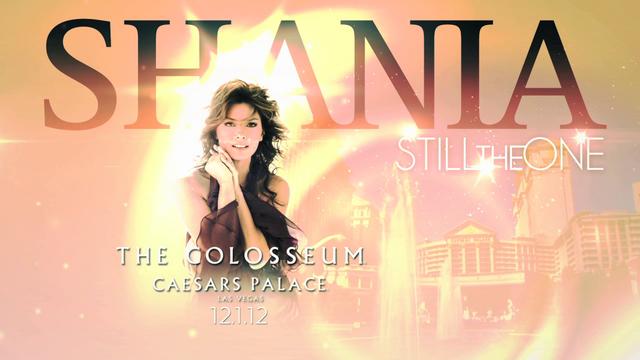 Shania Twain fans should prep their voices and study their Shania lyrics, as one lucky winner will receive a trip to Las Vegas to see the multi-platinum artist‘s new show, SHANIA: STILL THE ONE, at The Colosseum at Caesars Palace. The winner will also be given the once-in-a-lifetime opportunity to perform on his or her own for up to a week in a Caesars Entertainment venue on the Las Vegas Strip.

Fans will be able to audition by singing their favorite Shania song in a custom-designed singing space in Caesars Entertainment’s Total Rewards booth at the CMA Music Festival June 7-10. The booth will be located in Fan Alley off Broadway and 4th Avenue, and will be open 10 a.m. – 6 p.m. June 7, 8 and 9 and 10 a.m. – 4 p.m. June 10.

For those who do not have the opportunity to audition at the festival, video entries will be accepted online at www.Facebook.com/CaesarsPalace June 18 – July 15. A panel of judges, made up of representatives from Caesars Entertainment, as well as Sandbox Management, Shania’s management team, will review all entries from the festival and online and will select the winner. The lucky fan will receive a three-night stay at Caesars Palace, a $200 food credit, two tickets to SHANIA: STILL THE ONE and the opportunity to perform at a Caesars Entertainment venue on the Las Vegas Strip. Additionally, the public will be able to view and vote on all online entries Aug. 1 – 8 to select a fans’ choice, who will win a two-night stay at Caesars Palace, two tickets to SHANIA: STILL THE ONE and a $100 food credit. Both winners will be announced by Aug. 10.

4 replies on “Caesars Palace Gives Shania Twain Fans An Opportunity To Win A Trip To See Shania: Still The One In Las Vegas”