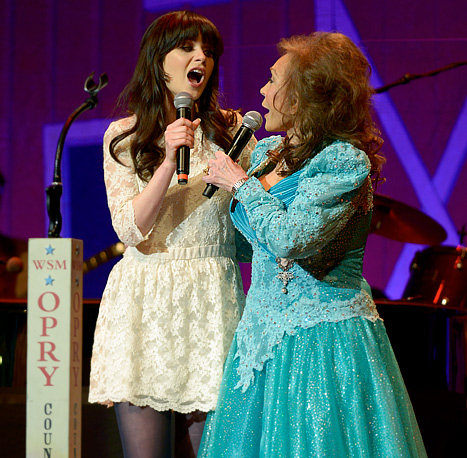 Country music legend Loretta Lynn announced on May 10 from the stage of the historic Ryman Auditorium during Opry Country Classics that she has chosen Grammy® and Golden Globe nominated actress and star of FOX TV’s hit show, “New Girl,” Zooey Deschanel to portray her in an upcoming Broadway-bound stage adaptation of Coal Miner’s Daughter.  Following the announcement, Ms. Deschanel joined the country music icon onstage for a duet of Ms. Lynn’s signature song, “Coal Miner’s Daughter.”

The onstage announcement and performance mirrored the 1979 Grand Ole Opry appearance where Ms. Lynn invited a young Sissy Spacek onstage to announce that she had chosen the actress to portray her in the forthcoming film.  Ms. Spacek went on to win the Academy Award for her performance.

“It’s a long way from Butcher Holler to Broadway in New York City. I never imagined I’d see Coal Miner’s Daughter on a movie screen, and now I can’t believe it’s going to be on a stage for people to see,” says Ms. Lynn. “I’m going to be right there in the front row. And I know Zooey is going to be great – she sings and writes her own songs just like I do, and we even have the same color eyes!”

“Loretta Lynn and her music have been inspirations for me for as long as I can remember,” said Ms. Deschanel.  “She is a true legend and to be chosen to play such an iconic woman is a dream come true.”

The Broadway-bound stage version of Coal Miner’s Daughter will tell the remarkable story of country music legend Loretta Lynn, from her impoverished Kentucky childhood to her unlikely and triumphant rise to become the First Lady of Country Music and one of the greatest women of her generation.

Coal Miner’s Daughter will be brought to the stage by two of Broadway’s most prolific, Tony Award-winning producers, Fox Theatricals (Kristin Caskey and Mike Isaacson) and Scott Sanders Productions, which have collectively brought some of the biggest hits to the stage, including Legally Blonde, The Color Purple, Red, Thoroughly Modern Millie, Death of a Salesman with Brian Dennehy, Elaine Stritch: At Liberty, and the current revival of Evita starring Ricky Martin.

The creative team and dates for the production will be announced in the coming months.  The schedule will not conflict with Ms. Deschanel’s current commitment to the hit FOX TV show, “New Girl,” on which she stars and produces.