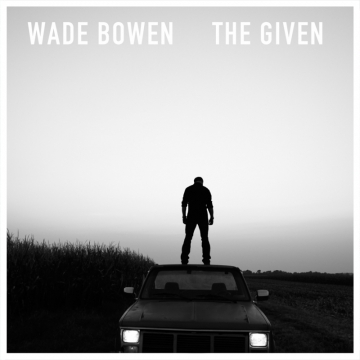 Award winning singer/songwriter Wade Bowen has spent the last 14 years making a living of 200-plus nights a year on the road with developing his fan base one show at a time.  Caught somewhere between a “new” artist working on his major label debut and a proven road veteran with five independently released albums, Bowen and Sea Gayle/BNA Records are responding to fan demand for new music by releasing a 10-song collection THE GIVEN on May 29, 2012.

The new music will be available at all digital music retailers and in select brick and mortar stores. As an added bonus, Bowen will give fans full-access to the recording process by offering the work tapes from the writers’ room of several of the new tracks exclusively on www.wadebowen.com beginning release day.

“The album is called The Given because I feel like all of these amazing opportunities have been given to me by my fans,” explains Bowen.  “They are the reason I get to live my dream every night and they’ve been patiently waiting almost three years now for new music.  So, I’m excited to be able to say ‘here it comes and there’s more on the way!’ I’m so blessed that they’ve stuck with me and that I have a great team at the label who is willing to let me throw the rules out and get this special version for the fans out right away.”

“With the fan base that Wade has already built, it only makes sense to throw out conventional wisdom and make this great new album available to his thousands of loyal fans as soon as possible,” said Sony Music Nashville Chairman and CEO Gary Overton.

Produced by Justin Niebank, the 10-song disc reflects Bowen’s evolving vision as a songwriter, his independent spirit and smoky baritone voice. Newcomers will hear a head-turning road-tested country artist with range. In addition to nine songs that include Bowen’s name in the writing credits, the album also includes a Townes Van Zandt cover of “To Live Is To Fly” featuring special guest vocals by Guy Clark.

With nine No. one’s on the Texas Music Chart, multiple awards including 2009 Texas Music Awards’ Male Vocalist of the Year and the 2010 Lone Star Music Awards’ Live Act of the Year, three studio albums and a Live At Billy Bob’s CD/DVD combo at the iconic club in Fort Worth under his belt, Bowen’s new music isn’t a debut, more like a fresh start on a bigger stage. His calling toward authentic music that reaches people is not unique to any geography, it lives in the heart and the work of the artist. Those who’ve believed in Bowen all along will find this in THE GIVEN and the upcoming albums and tours to follow. For more info and a full list of tour dates, visit www.wadebowen.com.