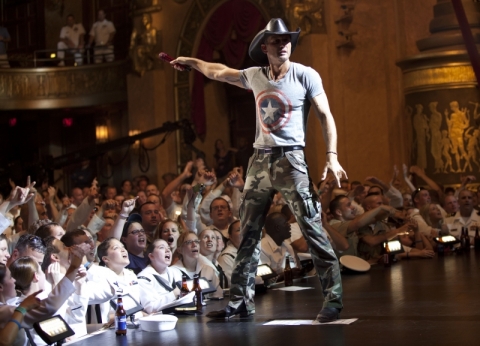 Country Music Superstar Tim McGraw spent Memorial Day performing for a packed house of servicemembers at New York City’s Beacon Theatre.  In partnership with Chase and the United Service Organizations (USO), the show was streamed live via YouTube and to military bases around the world on The Pentagon Channel.

“These men and women go out and put their lives on the line to protect the simple freedoms we enjoy every day,” said McGraw.  “Playing for them last night was a thrill for me, and it was just small gesture of appreciation.  I hope there will be a lot more of these types of shows as we get deeper into our HomeFront program.   The energy in The Beacon was electric last night…it was the perfect way to spend Memorial Day.”

McGraw recently launched a nationwide program called HomeFront in partnership with Chase and Operation Homefront to award mortgage-free homes to wounded warriors and servicemembers in need at each summer concert date.

Up next for McGraw is the start of what is anticipated to be the biggest stadium tour in country music history. THE BROTHERS OF THE SUN TOUR WITH KENNY CHESNEY AND TIM MCGRAW kicks off on June 2 in Tampa and will hit the nation’s biggest stadiums through August.