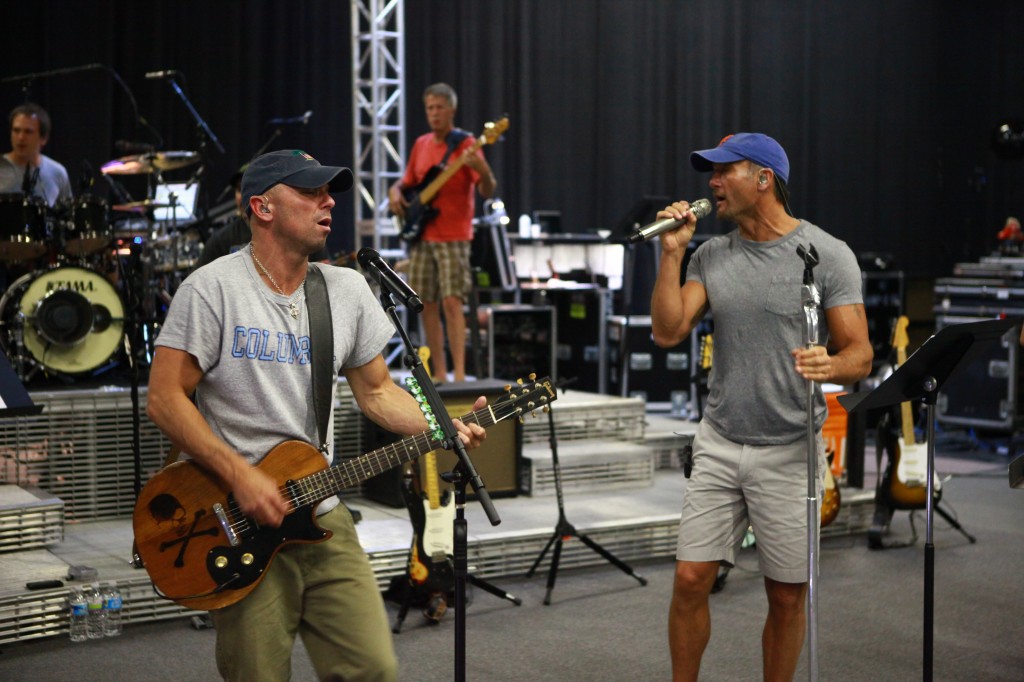 With the drumbeat to summer growing louder, rehearsals for the hottest tour of the summer are in full swing. The ‘Brothers of the Sun ‘ Tour, with Kenny Chesney and Tim McGraw, hit the next level of production yesterday when Chesney and McGraw met for their first on-stage, joint rehearsal.

“Yesterday’s rehearsal with Tim and I and our bands was as electric and exciting as we anticipated,” said Chesney, the man with nine summers of playing to crowds of more than one million a year. “It’s been a long time since we’ve played on stage together and the chemistry and excitement is just so natural. It’s going to be a dream come true to have our years of friendship come together on stage for what will be one unpredictable, loud, hell of a summer, and I can’t wait,” Chesney continued.

The 3+ hour working rehearsal found the friends working out songs for the tour, which kicks off June 2 in Tampa, FL. With shows at more than 20 stadiums across the country, including MetLife Stadium in East Rutherford NJ, Soldier Field in Chicago, IL, Lincoln Financial Field in Philadelphia, PA, Heinz Field in Pittsburgh, PA, Gillette Stadium in Foxboro, MA and Cowboys Stadium in Dallas, TX, the tour is set to be the musical event of 2012.

This weekend’s Amazing Race 2012 charity event in New Orleans with Drew Brees and Matthew McConaughey marks Chesney and his band’s first public performance since the debut of “Feel Like a Rock Star” at the ACM Awards. Chesney’s 13th studio album, Welcome To The Fishbowl, will be available on June 19 (BNA Records) and the first single, “Feel Like A Rock Star,” with tourmate Tim McGraw, debuted in early April and has quickly climbed the charts.

To see if Chesney & McGraw are coming to an area near you, please click HERE.