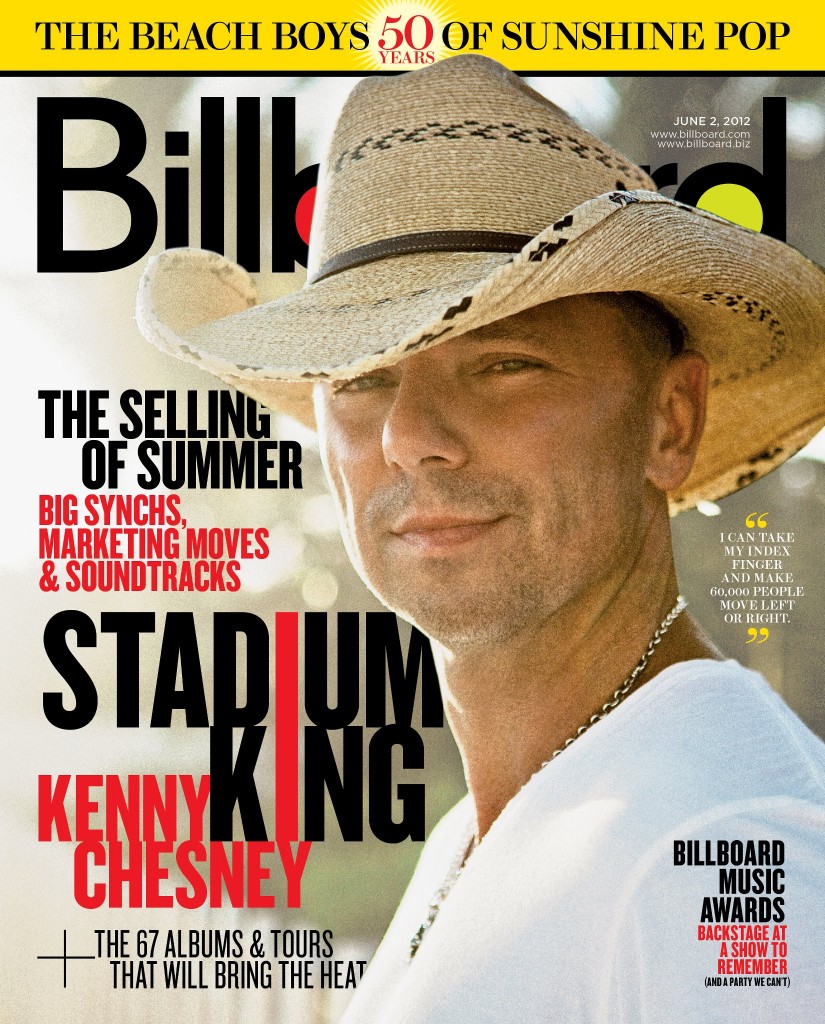 Kenny Chesney rocks the June cover of Billboard Magazine.  Indicated as the “Stadium King”, Chesney is set to embark on his Blockbuster Summer Tour with close friend Tim McGraw.  The Brothers of the Sun Tour kicks off Saturday, June 2 in Tampa, FL and will make their way across the nation playing stadium after stadium including Cowboys Stadium in Dallas, Angels Stadium in Anaheim, Lucas Oil Stadium in Indianapolis, Gillette Stadium in Foxoboro, and many, many more.

In addition to the Brothers of the Sun Tour, Chesney is also gearing up to release his 13th studio album Welcome To The Fishbowl on June 19.  “I’m more comfortable as a vocalist and as an interpreter of songs and a songwriter, more than I have been on the previous 12 records” Chesney tells Billboard.  In this interview with Billboard, Kenny also explains his take on recording songs for his live shows.  “Making a song is a wonderful, creative time, but for me it can be a very stressful time,” Chesney says. “If you don’t get it right in the studio, you’re not going to get it right on the radio and out on the road. When I’m in the studio, I imagine myself being in the grass at an amphitheater. ‘What’s going to turn me on? What’s going to make me care?'”

Digging deeper into his forthcoming album, Chesney reveals details on the first song he recorded for Welcome To The Fishbowl. “The first one I recorded for it was ‘While He Still Knows Who I Am,’ and even that has an element of searching on it.” The character in the song is going back home to visit a father suffering from Alzheimer’s disease. “But it’s got so much more than that,” Chesney says. “This guy’s going back to reconnect with his father, but in a sense he’s trying to connect with himself, too. He’s busy and he’s getting lost in the world, and that was me to a T, really. It’s interesting that I have this knack for connecting with thousands of people in an audience and, in an ironic kind of way, in the middle of doing that I’ve felt this disconnect from the people that love and care about me the most and molded me as a person growing up in East Tennessee. In the time between releasing ‘Hemingway’s Whiskey’ and now, that basically describes my personal life. That’s why this was the first song I recorded, and how this whole thread started on this record.”

Check out the entire article in Billboard Magazine.  Pickup your copy on newsstands, or to order this issue please click HERE.

Be sure to catch Chesney & McGraw on the Brothers of the Sun Tour this summer.  To see if they are coming to an area near you, click HERE.