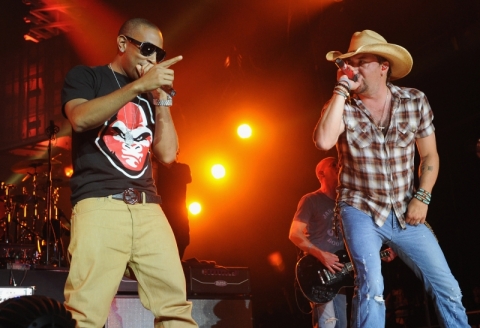 MULTI-PLATINUM Georgia native Jason Aldean played a two-night stand of sold out shows at Atlanta, GA’s Aaron’s Amphitheatre at Lakewood on Fri. and Sat.  Aldean kicked off the summer leg of the record-breaking 2012 MY KINDA PARTY TOUR on Thurs. night in Birmingham, AL and will continue on to the nation’s biggest amphitheatres this summer.

“I’ve never felt the kind of energy that the fans from the ATL brought this weekend,” said Aldean.  “I didn’t think it could get any wilder, and then when Luda came out, the place came totally unglued.  We’ve gotten to perform together several times, but man, he’s the Mayor of Atlanta, so this one was beyond cool.”

Aldean is currently celebrating his fifth consecutive No. one song with “Fly Over States” from CMA’s “Album of the Year” MY KINDA PARTY.  For a full list of tour dates, visit www.jasonaldean.com.