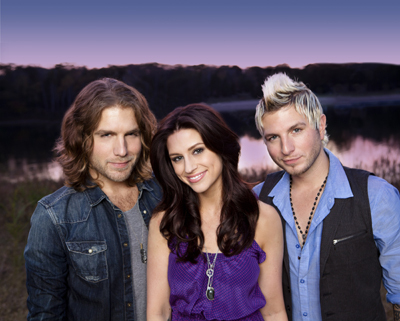 Country music trio Gloriana will be featured on the May 21st episode of the hit reality romance series The Bachelorette on ABC. In the second episode of the popular series Gloriana will perform a surprise concert in Charlotte, NC during a unique 1-on-1 date with the newest Bachelorette, Emily Maynard, the first single mom to ever star on the series, who first captured America’s heart on the 15th season of “The Bachelor.”  Fans can tune in to watch Gloriana’s performance on The Bachelorette Monday, May 21st at 8pm EST (check local listings), on ABC.

Gloriana’s latest single “(Kissed You) Good Night,” from their forthcoming second studio album A Thousand Miles Left Behind, is currently in the Top 20 on the Billboard Country Singles chart and has become the fastest rising single of the trio’s career.

“I’m a huge fan of The Bachelor and The Bachelorette,” said Gloriana band member Rachel Reinert. “I watched Emily when she was a contestant on The Bachelor and I was an instant fan of hers, so hearing that she is a fan of our band was a wonderful surprise! I’m excited to watch the new season, and I’m even more excited that we got to be a part of it.”

“(Kissed You) Good Night,” written by band member Tom Gossin and Nashville songwriter Josh Kear, has quickly become a fan favorite out on the road and the accompanying video has been voted by fans onto the GAC Top 20 Countdown for six weeks straight and can also be seen on CMT.  Gloriana recently put the finishing touches on their much anticipated second studio album on Emblem Music Group/Warner Bros. Records, A Thousand Miles Left Behind, with Grammy Award winning producer and Emblem Music Group label owner Matt Serletic (Willie Nelson, Rob Thomas, and Aerosmith). Gloriana released their debut self-titled album in 2009 and quickly became the best-selling debut country act, winning the 2009 fan-voted American Music Award for Breakthrough Artist and the 2010 Academy of Country Music Award for Top New Vocal Group.