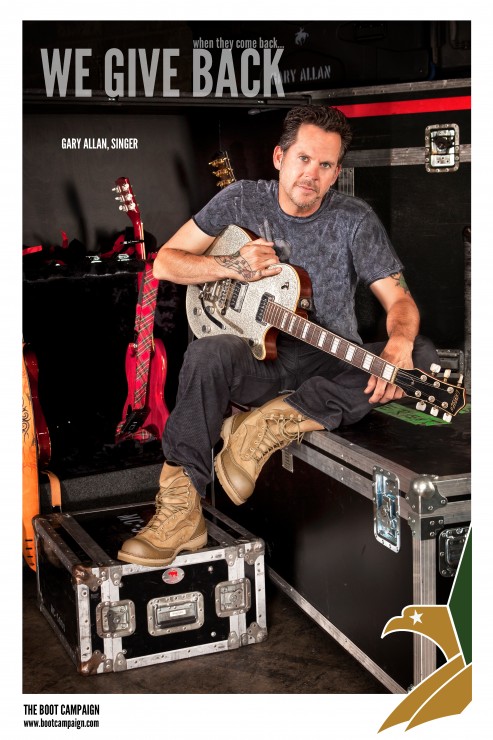 Military non-profit The Boot Campaign has a new supporter on board! Country superstar Gary Allan has pledged his commitment to the troops by putting on his own pair of Boot Campaign military issue combat boots and “taking a walk in a soldier’s shoes.”

Supporters of the Boot Campaign purchase boots with all proceeds going to partner military charities that help with a variety of both physical and emotional issues that returning soldiers face today. The Boot Campaign wants Americans to put the boots on to “symbolically walk in the shoes of our military men and women to remember their service and sacrifice.”

“As a former member of the Army, this holds a special place in my heart. I’m proud to work with such a fine organization. I’m headlining the Throwdown Tour this year and was glad to see that the Boot Campaign was going to be on the road with us. I think it’s great that a tour of this size is working hand in hand with the Boot Campaign, supporting veterans as they come home from combat…it just feels right,” said Gary Allan.

With the allure of a modern day outlaw, Gary Allan has won over legions of fans with his signature blend of rugged vocals, rebellious lyrics and raucous live performances. He has sold over 7 million albums and released five platinum and gold albums in a row including two that topped the Billboard Country Albums Chart. Allan has also topped the charts with four #1 hits at country radio and has nearly a dozen Top 10 hits to his credit. He has been described as “dark and dreamy” in Entertainment Weekly, “soulful and rough around the edges” in Playboy and deemed a “maverick” by Rolling Stone. He has sold out venues as a headliner from coast to coast, appeared on Late Show With David Letterman, The Tonight Show With Jay Leno, CBS Early Show and has landed on the covers of Country Weekly, Pollstar and People magazine. While becoming a force on the country music scene, Allan has remained true to his artistic voice each step of the way.