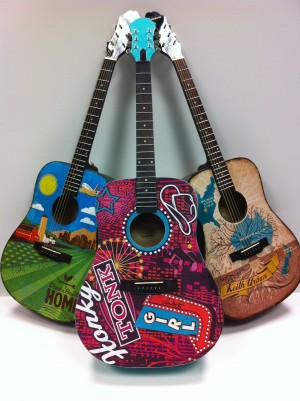 The Fourth Annual Guitars of the Stars Benefit Auction is giving country fans the opportunity to purchase one-of-a-kind guitars inspired and autographed by everyone from the Opry’s newest member to the Coal Miner’s Daughter. The event is scheduled for Thurs., June 7, 5 p.m. at The CMA Music Fest Buckle Stage at 4th Ave. and Broadway in downtown Nashville.  The event is open to the public, and all proceeds from the auction will benefit the Opry Trust Fund which assists members of the country music community in need.

In addition to providing one of the guitars for auction, country newcomer, 19 Recordings/BNA Records artist, and American Idol Season 9 alumni Casey James is set to co-host the auction and perform for the auction crowd. 650 AM-WSM radio and GAC television personality Bill Cody will join James as host.

The Opry Trust Fund has for more than 40 years assisted members of the country music community in need of help with medical bills, living expenses, utilities, rent, and food.