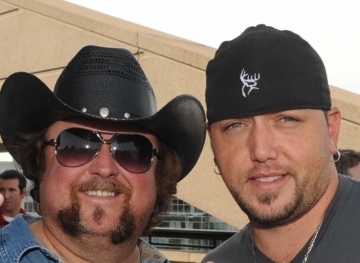 Average Joes Entertainment’s Colt Ford was as proud as he could be as news broke of his buddy, superstar Jason Aldean, and his smash hit, “Dirt Road Anthem,” being named “Top Country Song” at the 2012 Billboard Music Awards. Ford co-wrote the multi-platinum single for Jason Aldean in 2011.

“I am still amazed by how big this song really is,” explains Ford.  “I don’t think anyone could be more proud of Jason than I am. He deserves every award they have to offer. I wrote this song with my friend Brantley and now I have seen my friend Jason take it to one of the biggest songs in the world. It doesn’t get much better than that.”

Fans of “Dirt Road Anthem”can bid to win their chance to sing the award-winning song with Colt Ford onstage at the Country Weekly Kick-Off Party, Tuesday, June 5 at the Hard Rock Cafe in Nashville, TN.  Bidding is currently online HERE with proceeds to benefit Musicians On Call.