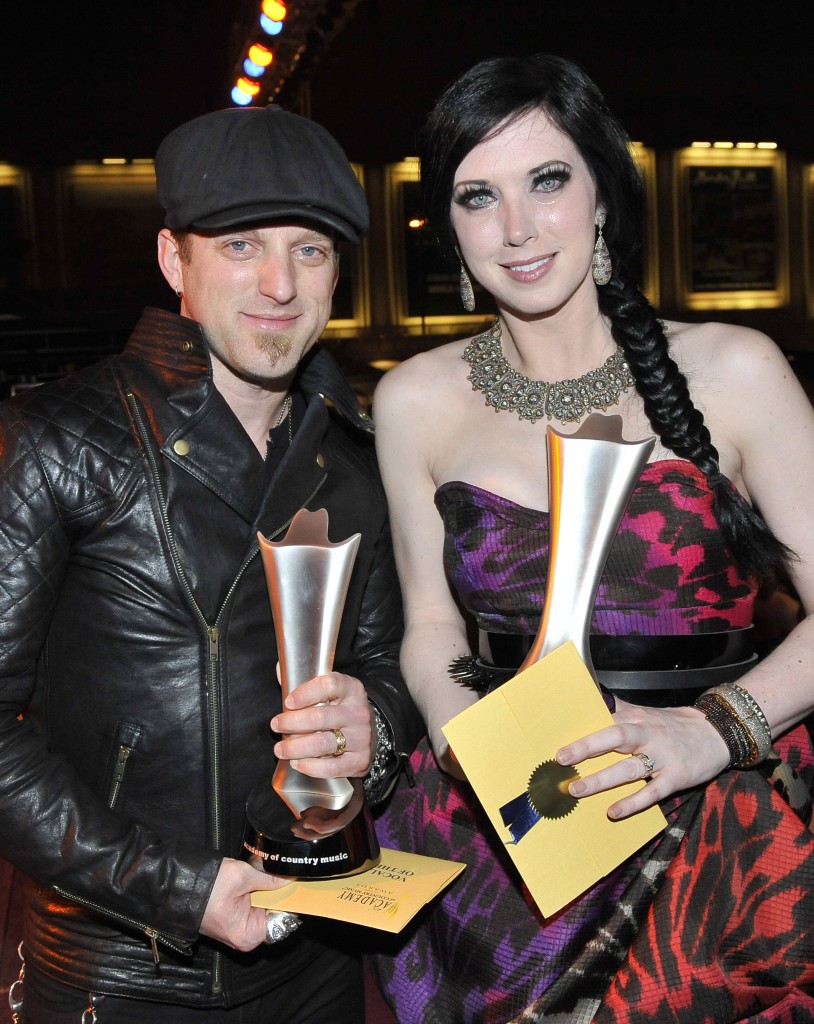 The husband/wife duo comprised of Keifer and Shawna Thompson was surprised with the award onstage by ACM CEO Bob Romeo in front of thousands of screaming fans at the ACM Salute to the Military Concert at the ACM Experience at Mandalay Bay in Las Vegas on Saturday night — just moments after they had completed their set.

Thompson Square – who was officially honored as “Country Music’s Breakthrough Artist of 2011” by Music Row Magazine in February — dethroned reigning Country superstars Sugarland who have won the award for 2 years.  Sugarland is also the reigning CMA Awards Vocal Duo for the past 4 years.

Thompson Square becomes only the third duo to win the ACM “Vocal Duo of the Year” Award in the past 20 years (since 1991) with Sugarland and Brooks & Dunn previously winning in the category respectively.

“It’s been a long, long road,” Keifer Thompson told the crowd.  “This is one of the greatest nights of our lives.”  Overcome with emotion, he continued, “It’s hard to talk when you’re crying.”

“This is a very bittersweet moment for me,” added Shawna Thompson as she fought back tears. “More sweet than bitter.  My dad passed away a month ago.  This is for my dad.”

Thompson Square’s win is a Country Music Cinderella Story of sorts as the duo is hardly an “overnight success,” despite its quickly skyrocketing career.

In fact, Keifer and Shawna Thompson pounded the pavement for 13 years in the music industry before finally signing to tiny independent label Stoney Creek Records.  The young married couple worked odd jobs, played bar shows and knocked on countless closed doors during that time before deciding they would hang up their microphones after one last year of perseverance.  During one final showcase, Broken Bow Records President/ CEO Benny Brown recognized something special in Thompson Square and signed them to his brand new independent label Stoney Creek Records (sister label to Broken Bow Records and home to Jason Aldean).

In the past year, Thompson Square’s star has risen meteorically. The duo’s self-titled, debut album has produced 2011’s #1 Most Played Country Song “Are You Gonna Kiss Me Or Not,” the follow-up Top 10 hit, “I Got You,” as well as the duo’s latest hit, “Glass,” which showcases a more serious side of the duo as well as poignant, powerhouse vocals from Shawna Thompson.

Also in 2011, Thompson Square was named one of USA Today’s “Six Pack of Success” stories, was heralded as USA Weekend’s “Who’s Hot in Hollywood,” peaked at #3 on MTV’s Music Meter (all genres) and landed on Entertainment Weekly’s “Hot List.”

Additionally, the 2011 American Music Award nominee for New Artist of the Year is also the only duo to reach #1 on CMT’s Top 50 Artist Chart in 2011.  2011 also found Thompson Square nominated for multiple CMA and CMT Awards as well as playing to over one million fans, many as part of Jason Aldean’s My Kind of Party Tour.

Thompson Square is currently criss-crossing the U.S. as part of Lady Antebellum’s Own The Night World Tour with upcoming stops to include two nights at NYC’s legendary Radio City Music Hall on May 3 and 4.

Even with all of Thompson Square’s recent success, Keifer and Shawna have still found time to give back.  The duo recently partnered with ChildFund International to raise awareness and support for children across the world dying from hunger and poverty.  Thompson Square has personally sponsored a little girl named Lady in Indonesia. The duo will also give a free, autographed copy of its self-titled debut album to fans that sign up to sponsor a child at Thompson Square concerts.