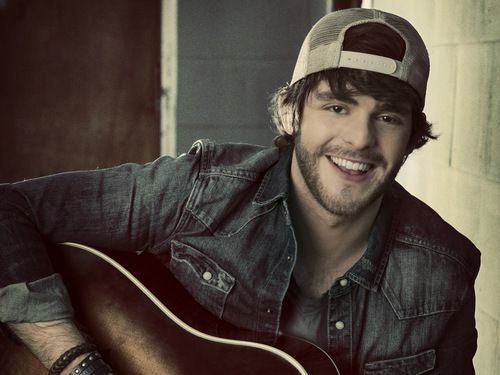 The Valory Music Co.’s Thomas Rhett has been selected as one of the opening acts this summer on Toby Keith’s previously announced “Live In Overdrive Tour Presented By Ford F-Series.” The 36-city trek kicks off in Salt Lake City, UT, on June 14 and will run through September 22. A full list of tour dates and ticket information are available here.

The hot newcomer has recently garnered a lot of buzz, being named one of PEOPLE Country magazine’s “Fresh Faces” and earning a spot on Country Weekly’s “Ones To Watch in 2012” list.

Currently, Thomas Rhett is working on his debut album in the midst of traveling across the country on a radio tour in support of his Top 30 and rising debut single, “Something To Do With My Hands.” Over 100 major market Country radio stations have added the single to their playlists since its release in March.

Thomas Rhett has also been selected by CMT for their power-packed Big New Music Weekend where the rising star’s music video for “Something To Do With My Hands” will world premiere on April 27th.

“When I found out I was gonna be opening for Toby Keith, I couldn’t sleep for two days because I was so pumped. This is one of those tours that every new artist dreams about,” said Thomas Rhett. “I’m really excited to get back out on the road with my band and play these awesome amphitheaters with Toby. I feel extremely blessed to have been selected for such a huge tour! It’s gonna be a wild summer!”

The twenty-two-year-old Thomas Rhett grew up in a musical family where he watched his father, Rhett Akins, write and perform Country music. He signed his first publishing deal with EMI in 2010 and shortly thereafter landed his first cut on Jason Aldean’s Platinum-selling album MY KINDA PARTY with “I Ain’t Ready To Quit.”

For everything Thomas Rhett, visit his official website www.ThomasRhett.com.