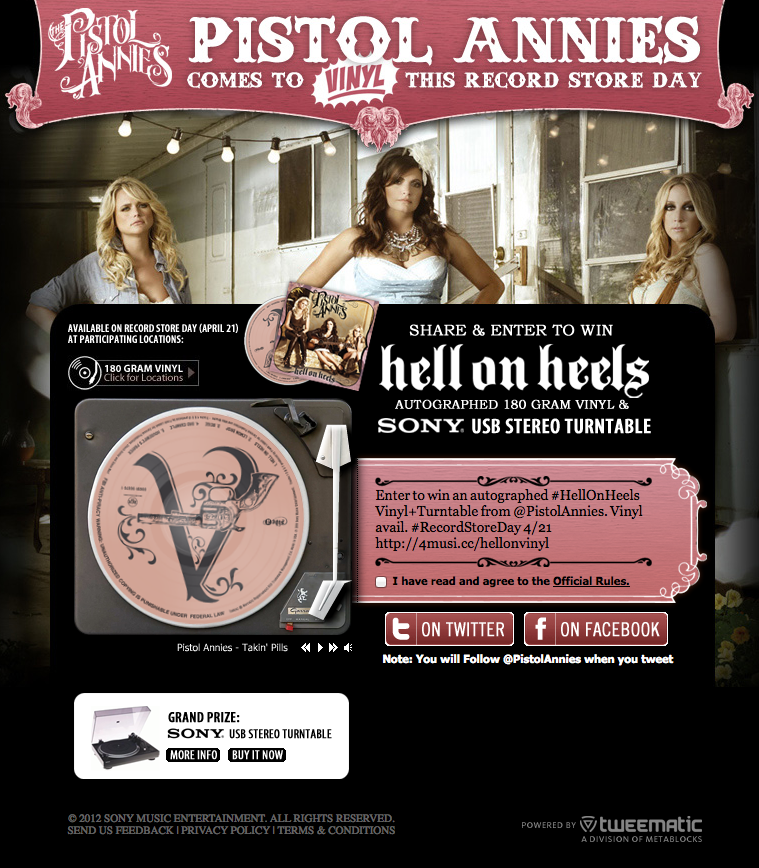 Miranda Lambert, Ashley Monroe and Angaleena Presley, a.k.a. the Pistol Annies, will commemorate Record Store Day with the vinyl release of their critically acclaimed album, Hell On Heels.  The vinyl version will be released on Record Store Day which is Saturday, April 21. The CD and digital album was released in August of last year and has already yielded a Gold single with the title track.

In addition, by clicking HERE you can check out an animated record player where fans can listen to the album with the “fuzz and crackle” feel of a well-loved and worn vinyl record. By sharing the widget, fans are automatically registered to WIN an autographed copy of the album and a Sony USB Stereo Turntable to play it on.  Fans can find a list of participating independent record stores on the site as well.

“The music of the Pistol Annies is the three of us truly being ourselves—not only in our songwriting and storytelling, but also in the way we perform as a team.” We wanted to make music that people talk about but might not want to admit and it’s the kind of raw and honest country music that deserves to be on vinyl,” said Miranda.

The trio was born during a songwriting session with Lambert, a.k.a. “Lonestar Annie” and Monroe, a.k.a “Hipppie Annie.” While writing and sharing stories, Monroe decided that Lambert and Presley, a.k.a “Holler Annie,” needed to meet, and a midnight phone call with the three of them launched the group.  The three of them wrote and co-wrote every song on the album and were joined by Pistol Andy, a.k.a Blake Shelton, on the song “Family Feud.”

For more on the Pistol Annies go to www.pistolannies.com.