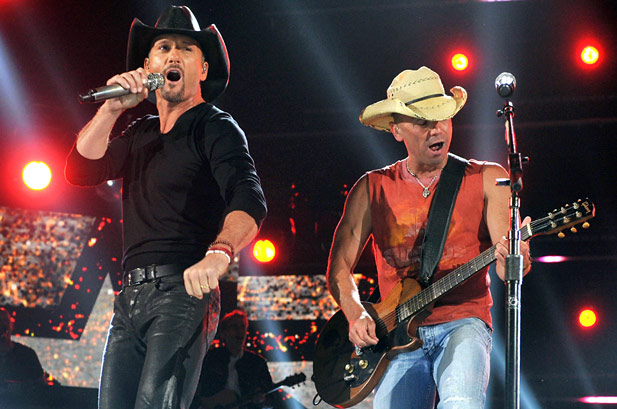 Kenny Chesney’s duet with Tim McGraw, “Feel Like a Rock Star” debuted at #13 only days after its premiere at the Academy of Country Music Awards, making it Chesney’s highest debut ever on Billboard’s Country Songs chart. Prior to “Feel Like a Rock Star,” Chesney’s highest Billboard debuts were “Don’t Blink” (#16) in 2007 and “The Boys of Fall” (#17) in 2010. The song also debuted at #17 on Mediabase’s Country chart, topping his previous high, “Don’t Blink” (#22).

“This song was such a blast to record and I’m thrilled at the response it’s already received,” Chesney said. “Going on the road with Tim this summer is just going to be one long party and we can’t wait to get started in June.”

Chesney will showcase songs from Welcome To The Fishbowl this summer on the 20-stadium ‘Brothers of the Sun’ Tour, with Chesney and McGraw. The tour also features Grace Potter & The Nocturnals and Jake Owen.  To see if they are coming to an area near you, click HERE.