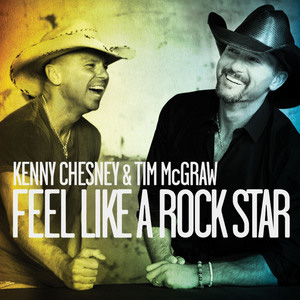 The music video for “Feel Like a Rock Star,” Kenny Chesney’s smash hit duet with Tim McGraw, will post in-full on AccessHollywood.com on Friday, April 20 at 7:30pm ET (www.accesshollywood.com). Access Hollywood will also air thirty seconds of “Feel Like A Rock Star” during the April 20 program, marking the video’s televised world premiere.

Directed by longtime Chesney collaborator Shaun Silva, the video finds Chesney and McGraw in a massive, all-white aircraft hangar evoking the song’s premiere performance at this year’s Academy of Country Music Awards. The song made an historic #13 debut only days after the performance – Chesney’s highest debut ever on Billboard’s Country Songs chart and the highest-bowing duet between two co-lead artists in the chart’s BDS-era history.

The chemistry between Chesney and McGraw is just a preview of the excitement and fun they will bring fans this summer on the blockbuster ‘Brothers of the Sun’ Tour, with Chesney and McGraw. Chesney has said that the coast-to-coast tour, which has already sold more than 750,000 tickets, is going to be “one big spring break party all summer long.”

To see if Kenny & Tim are coming to an area near you, please click HERE.