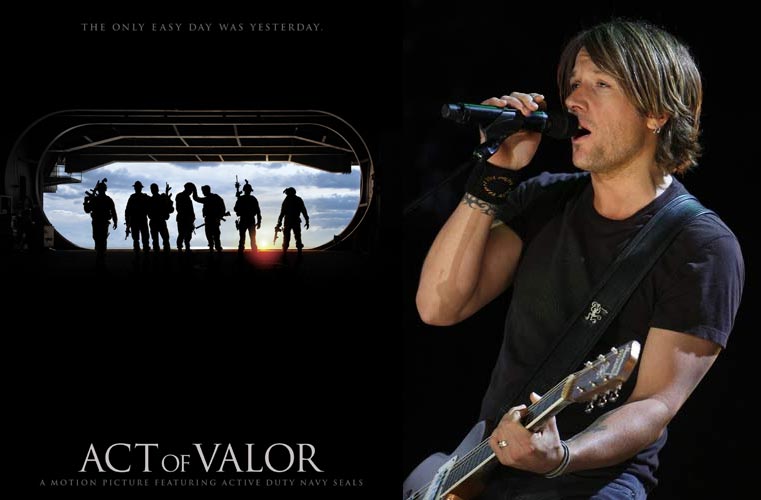 Last week, at the 47th Annual Academy of Country Music Awards, Keith Urban debuted “For You”, his song written specifically for the #1 motion picture Act Of Valor. His performance of the song, which concluded with an emotional and rousing standing ovation, paid tribute to our Navy SEALS.  “For You” co-written with Monty Powell and played during the closing credits of the film, will be released today.  It will be the follow up to “You Gonna Fly”, Keith’s third consecutive #1 (“Without You” and “Long Hot Summer”) from his latest CD Get Closer.  (“For You” appears on the Act Of Valor Soundtrack.)

“I felt so privileged and honored to have been given the opportunity to be a part of Act Of Valor and to shine a different kind of light on the work that the SEALS do,” said Urban.

Urban will donate all of his artist and publishing royalty’s to the Navy SEAL Foundation which serves to support SEAL families and their parent commands by easing financial burdens, establishing support networks, and funding command sponsored activities. “For You” can be purchased through Urban’s website and on iTunes and Amazon.

Urban said previously of “For You”, “I loved the challenge of writing for a film. I’ve never done that before. After seeing Act of Valor, my co-writer (Monty Powell) and I wanted to capture the essence of not only what these men and women do so extraordinarily, but how that relates to all of us. ‘Valor’ shows us what they are willing to give their all for, which made me wonder, ‘what am I willing to give my life for?’ ‘For You’ is intended to allow the listener to define who that is for them.”

To see the official music video for “For You” click HERE. For more official Keith Urban news and information go to KeithUrban.net.