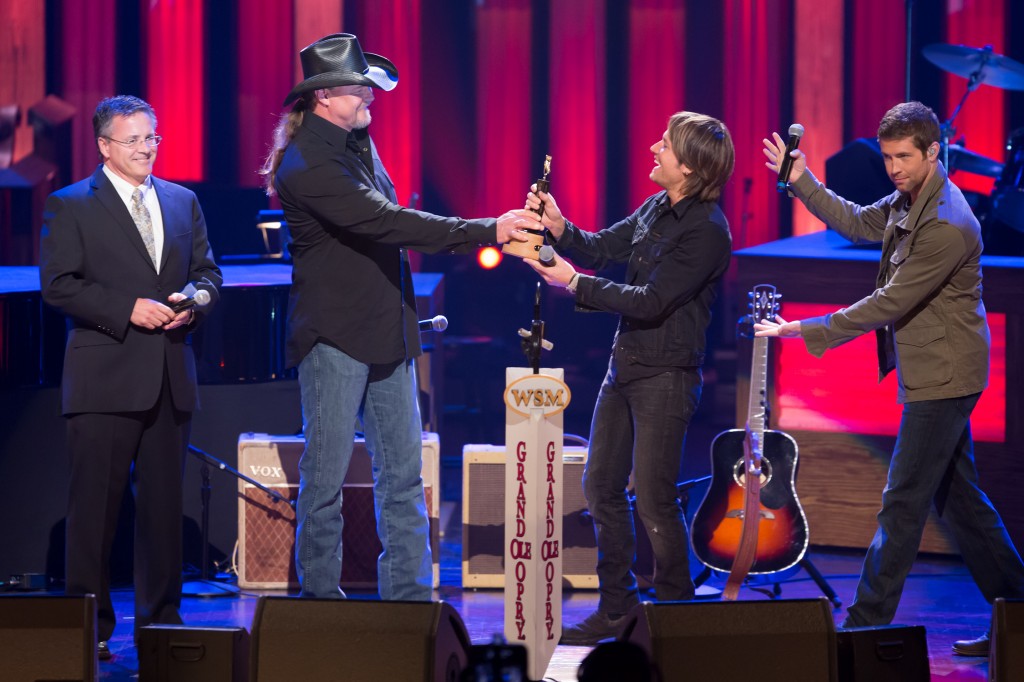 Keith Urban became an official member of the Grand Ole Opry on Saturday night (April 21st), and showed the fans in the audience, the ones watching it on TV or hearing it on the radio, just why he’s been such a great ambassador for country music and for Nashville and how deserving he is of Opry membership. He performed a handful of his hits, including “Days Go By,” an acoustic version of “Without You” before Opry members Trace Adkins and Josh Turner helped to present Keith with his Opry award, a 14-inch replica of the Grand Ole Opry microphone stand with a base made from wood from the Ryman Auditorium.

After Trace officially welcomed him into the family, Keith said “Thank you very much! Yee Haw!” After thanking Pete Fisher, the General Manager of the Opry, as well as other Opry members, his parents who gave him his love of country music, his wife and two daughters and his fans, among others, the superstar said. “I just want to thank the Opry for this honor, but also this responsibility,” says Keith. “I take this responsibility very seriously.” The superstar born in New Zealand and raised in Australia continued, “it’s a long way from Caboolture [Queensland, Australia] to the stage here at the Grand Ole Opry … and to stand in this circle is the most phenomenal thing. I just want to thank the Opry for this honor, but also the responsibility. This is a responsibility that I take deep to the heart of me. …This once and for all shows the global popularity and reach of country music. … I honor the history of country music, but I absolutely fully dedicate myself to the future of country music, as well. God bless you all.” He wrapped it up with “Who Wouldn’t Wanna Be Me.”

Brad Paisley congratulated Keith by a videotaped message and said it was – among other things – “the greatest thing that’s happened to [the Opry] in a long time.”

At his All for the Hall benefit concert in Nashville two weeks ago, he was issued the invite to join the Grand Ole Opry by Opry members Vince Gill, Rascal Flatts, Diamond Rio and the Oak Ridge Boys.

Keith is the first artist from outside North America to become an Opry member. He was born in New Zealand and raised in Australia, and he elaborated on stage Saturday about being a trailblazer who hopes to pave the way for other internationally-born country music singers.

After the induction Urban added his name plaque to the Member Gallery backstage at the Opry by using a pocketknife given to him by Opry member Marty Stuart. Later during an after show reception, Urban used the same knife to cut the Fender-shaped guitar cake. Urban quipped, “I just got this knife tonight and already I’ve used it to screw in a plaque and cut a cake.”

The induction aired on the sneak-peek episode of Noteworthy at the Opry on GAC-TV. The show will re-air Wednesday (April 25th) at 9pm ET; and Thursday (April 26th) 1am and 7pm ET. During the TV broadcast, pal John Mayer sent videotaped congratulations to Keith. “I hope you get the sense of what everyone has known for a while, that you are as good as the heroes you look up to, and you are rightfully taking your place with them,” Mayer said.

Little Big Town tweeted their congratulations to Keith last night: @LBTmusic@KeithUrban your induction into The Opry is much deserved!!! Wish we could have been there to celebrate with you. Congratulations!

To continue the celebration, fans can visit Keith Urban on Facebook and share their favorite moments from his career for a chance to win a Nashville experience including visits to some of the Music City places Urban loves most including the Opry, the Ryman Auditorium, Bluebird Café, a favorite restaurant, and more.

Keith is currently making his way up the country charts with his latest single, “For You.”