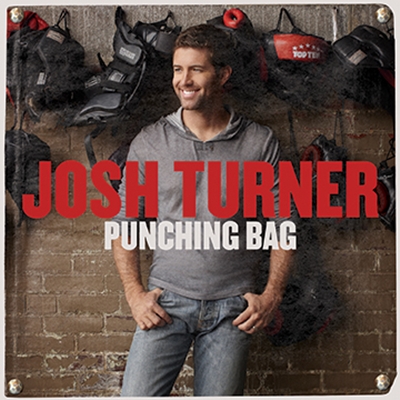 With four No. 1 smash hits in “All Over Me,” “Your Man,” “Would You Go With Me,” and “Why Don’t We Just Dance,” and over 5 million albums sold since his critically-acclaimed debut Long Black Train, UMG Nashville’s Josh Turner is slated to release his fifth studio album, Punching Bag, to stores nationwide onTuesday, June 12. The first single from the new album, “Time Is Love,” is in the Top 20 on the Country Billboardchart and swiftly rising, and the new music video for the song can be viewed here.

Josh co-wrote eight of the 11 tracks on Punching Bag, many penned within the four walls of his newly built cabin located on his property behind his home to serve as a ‘songwriter’s den’ and personal getaway. The cabin is inspired by his homestate of South Carolina and, Josh admits, contains some of his most prized possessions.

“I spent two years building my writer’s cottage. Once it was finished I was immediately in there writing songs. In total, I’ve written 27 songs in there and eight of those ended up on the record,” says Josh. “My hero and friend, John Anderson, was sitting across the table from me one day when we were writing and said, ‘What will really be a great day is when the songs you write here end up paying for this place!'”

The cabin made for a great escape the day Josh had the idea for the album’s title track, “Punching Bag,” which he wrote with long-time friend and songwriting partner Pat McLaughlin.

“The idea comes from one of those days that we all have, where everything just blows up in your face and nothing goes right. I had just had one of those days, and I came home and was standing in the closet with my wife and I unloaded on her about my day,” Josh tells AOL’s The Boot. “I told her, ‘Sometimes I feel like a punching bag, like life is just beating me up.’ When I said that, it struck me that it could be a huge song title. So I punched it into my phone and saved it. I held on to it until the right opportunity, [when I met with Pat McLaughlin].”