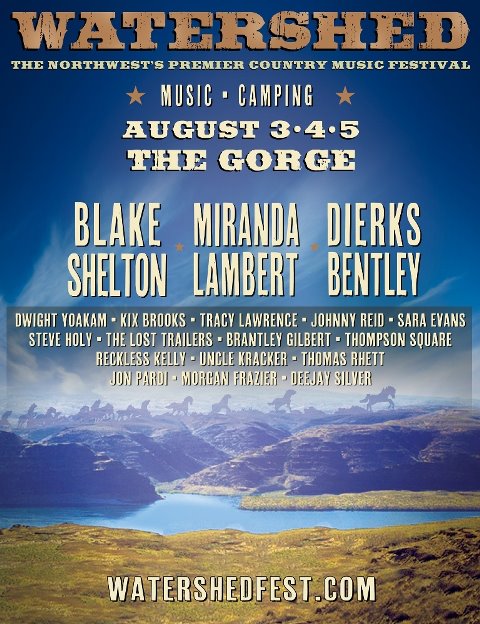 Live Nation Entertainment and ACM Promoter of the Year Brian O’Connell are leading the charge for a new country festival where the music and atmosphere will rival the serene, natural beauty of the landscape. Watershed Music Festival will take place August 3, 4 and 5 at the iconic Gorge Amphitheatre and is set to feature a versatile lineup of artists, camping, late night sets, impromptu jam sessions, collaborations and more. Located east of Seattle, the Gorge Amphitheatre provides a picturesque backdrop for the laid back, country vibe O’Connell has envisioned for this truly unmatched festival. Three-day festival passes go on sale May 5th at Ticketmaster.com and LiveNation.com.

“The Gorge provides a feeling that is impossible to recreate anywhere else,” said O’Connell. “It is truly a magical place and provides the perfect setting for a cool, eclectic country event. We wanted to create something that didn’t exist, from the caliber of artists to the camping and the atmosphere. I’m excited to be a part of it and see it all come together.”

“In the storied 25 year history of The Gorge, we’ve been fortunate to host many of the nation’s top country artists, but all have been single day concerts,” said Jeff Trisler, President of Live Nation Seattle. “For years, we’ve wanted to host a multiple day country festival that builds on the tremendous success for our annual Sasquatch Music Festival and Dave Matthews Band residency. We believe this event will bring that same sort of excitement and energy to The Gorge for an entirely new group of music fans.”

The Gorge Amphitheatre, located in George, Wash., is undoubtedly one of the most scenic concert venues in the world and offers sweeping views of the Columbia River Gorge. The area itself is a watershed for the Columbia River, thus inspiring the name of the event. The Watershed Music Festival will feature a limited capacity of 25,000 and will offer lawn terrace seating and premiere camping options. The amphitheatre has been the home of many historic concerts from bands such as Pearl Jam, Dave Matthews Band, Phish, Van Halen, Rush, Radiohead, Tim McGraw, Aerosmith, Metallica, Rascal Flatts, John Mayer, The Police, Brad Paisley, Tom Petty and the Heartbreakers and the annual Sasquatch! Music Festival.

Three day festival passes will start at only $90 and go on sale May 5 at ticketmaster.com.