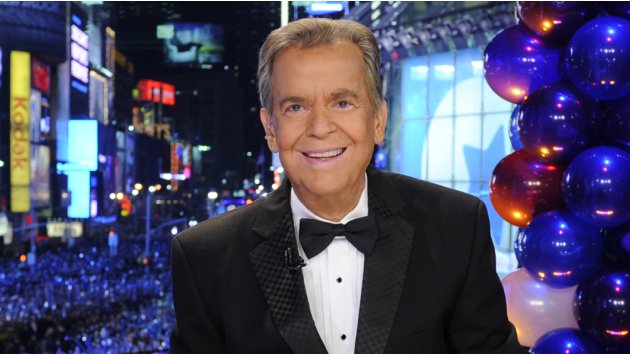 Dick Clark, 82, died today of a massive heart attack at a Los Angeles hospital. Clark widely known for “American Bandstand,” “American Top 40” and  “New Year’s Rockin’ Eve”, as well as producer of the Academy of Country Music Awards, will always be remembered.  Country Artists have taken to social media to express their thoughts and condolences on the passing of Dick Clark.

Thompson Square So sad to hear of Dick Clark’s passing. #dickclark Thanks Dick Clark for all the wonderful memories from my childhood watching American Bandstand! #RIPDICKCLARK Shawna

Jay DeMarcus Dick Clark. What is there to say… You’ve done it all, rest in peace….

Blake Shelton So proud I had the chance to shake hands with Dick Clark in my lifetime… Great man..

Chuck Wicks May you rest in peace Dick Clark.

Joe Don Rooney Dick Clark will be missed dearly! The effect he had on American music & American culture will be felt forever @rascalflatts thanks Mr. Clark

Trisha Yearwood Sending love and strength to the Dick Clark family. He was not only a legacy in the entertainment industry, but a really nice guy. We miss you. Rest in peace.

Little Big Town To one of the greatest legends of our generation. When we think of music & celebrations, we think of you. Thank you for what you gave us all. We love you, Dick Clark.

LeAnn Rimes RIP Dick Clark.  The impact you made on the entertainment industry with your heart and your infectious personality will never be forgotten. I had the honor of knowing you well, lucky me. My heart and prayers go out to the Clark family.

Montgomery Gentry Our thoughts and prayers go out to the Clark family. What a legendary life! Dick Clark is to music what Neil Armstrong is to the moon….a true pioneer!! Rest in peace.

Brad Paisley My heart goes out to Dick Clark’s family.What a life.Thank you for all you did, and your friendship. Now go get the music rockin’ in heaven.

Laura Bell Bundy Dick Clark was a legend who created legends…Inspiring entertainers & producers everywhere. May he rest in peace

Reba I will truly miss Dick Clark. My thoughts and prayers go out to Rac, Kari and the whole Clark family. Rest in peace, Dick. You deserve it.

Sara Evans So sad to hear about the passing of the legend Dick Clark. He will truly be missed! My heart goes out to his family.