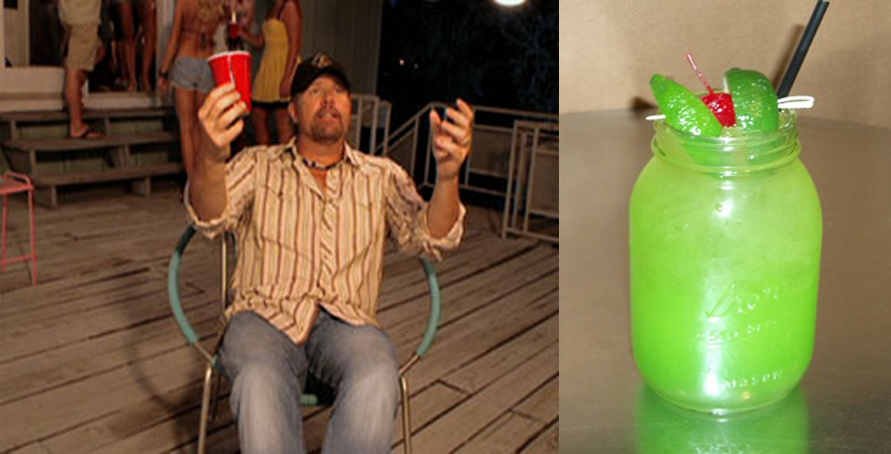 Three-time 2012 Academy of Country Music Awards nominee Toby Keith has just the thing for thirsty St. Patrick’s Day revelers: a splash of Mexico. Keith’s I Love This Bar & Grill restaurants (also nominated for the ACMs as “Nightclub of the Year”) will be serving “Swamp Water” during the upcoming holiday.

Developed by the chain’s Las Vegas-based mixologist, Swamp Water is based around Toby’s signature Wild Shot Mezcal, which is made a far cry from Ireland in San Luis Potosi, Mexico. Wild Shot is distilled from 10-year-old green agave plants, and the green theme carries through to the cocktail’s final presentation, in honor of the Irish celebration. (See recipe below.)

Though the drink is designed to be served in a mason jar, exceptions might be made for red Solo cups in honor of Keith’s viral smash “Red Solo Cup,” which has him up for three awards at the April 1 ACMs. Toby will be performing on the CBS telecast, as well. Prior to the ACM Awards performance, Toby’s high profile appearances include Ellen (March 15), the Tonight Show with Jay Leno (March 16) and Chelsea Lately (March 27).

The night before the ACMs, Keith is nominated with Usher, Bruno Mars and Justin Bieber for Favorite Male Singer at Nickelodeon’s Kids’ Choice Awards. And that nomination likely owes something to the platinum-certified “Red Solo Cup,” as well. With 14 weeks atop the Digital Country Downloads chart and an astounding 15 million views of the video, RSC is the biggest viral hit in country music history.

As for Wild Shot, Keith will be raising a glass (or cup) of his premium spirit to toast the opening of the 27th Annual Nightclub & Bar Convention and Trade Show in Las Vegas March 13. Keith will be participating in a noon ribbon-cutting ceremony that officially opens the show floor. Proceed to party…