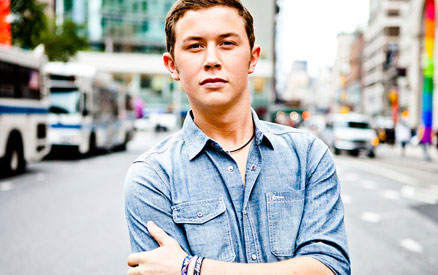 Are you a BIG Scotty McCreery Fan? Do you want to see him win the ACM Award for ACM New Artist of the Year??? Here’s how YOU can be a part of McCreery’s Official ACM Vote Video!! Round up your Mother, Father, Brother, Sister, Niece, Nephew, Son, Daughter or Cousin that are big SCOTTY McCREERY fans! Be an integral part of Scotty’s Official VOTE SCOTTY FOR ACM NEW ARTIST OF THE YEAR Video!!!

Scotty’s Team is creating a “Vote Scotty” Video Chain where fans encourage others to VOTE SCOTTY AT VOTEACM.com.

Simple video instructions are:
1.     Take a ball (any ball or throwing devise!!! Football, basketball, beach ball, volleyball, soccer ball, or even a Frisbee) and write LARGE AND CLEARLY on the ball: VOTE SCOTTY AT VOTEACM.com
2. Get 1 friend to stand off camera on your right side while you stand/sit straight in front of the camera and another friend to stand off camera to your left.
3. With the camera on, have your friend FROM YOUR RIGHT throw you the ball.
4. Catch the ball and show the VOTE SCOTTY sign on the ball clearly to camera.
5. Then throw the ball to your friend ON YOUR LEFT (or just throw it off screen).
6. Upload your video to your own YouTube channel using the video title: Vote Scotty McCreery ACM Video Submission

Fan videos are being accepted NOW through noon on Friday, March 16. For full instructions on what to do to be a part of the edit, please click HERE.