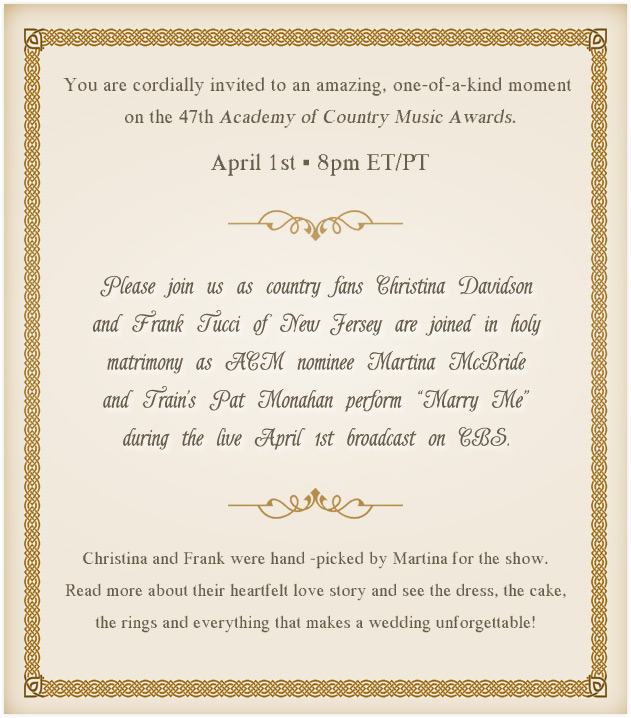 The Academy of Country Music announced today that Martina McBride, along with Train frontman Pat Monahan, is scheduled to perform her new single “Marry Me” on the 47th ANNUAL ACADEMY OF COUNTRY MUSIC AWARDS. To celebrate the message of the song, McBride and Monahan will perform the duet during a very special moment in the show when a couple will get married live onstage. The show, which honors country music’s top talent as well as the industry’s hottest emerging artists, is produced for television by dick clark productions and will be broadcast LIVE from the MGM Grand Garden Arena in Las Vegas Sunday, April 1, 2012 at 8:00 PM live ET/delayed PT on the CBS Television Network.

For the first time in ACM Awards history –and perhaps any awards history– a live wedding ceremony will take place onstage during McBride and Monahan’s duet of “Marry Me,” McBride’s current single from her latest album Eleven. The song was coined by Grammy Award-winning artist Monahan and originally released in 2010 as the third single from Train’s chart-topping fifth studio album Save Me, San Francisco.

McBride personally selected the lucky recipients of the onstage nuptials. Couple Christina Davidson and Frank Tucci thought they would never find love again.  In July of 2009, Frank lost his wife, Danielle, to thyroid cancer and in that same year, Christina lost her husband, Paul, in a tragic drowning accident.  As a way to deal with the grief of losing her husband and raising her two sons Stephen and Paul on her own, Christina started a support group for young widows and widowers in Washington Township, N.J. where she met Frank. Slowly their friendship blossomed into love as they bonded over their shared views about the challenges of single parenthood and the struggles to keep the memories of their spouses alive.  Their wedding will mark a new chapter in their lives, an intimate moment which they will graciously share onstage.  The bride will be wearing an Oleg Cassini gown as she recites her vows.  Fans can also follow Christina and Frank along their journey to the chapel at www.ACMwedding.com.