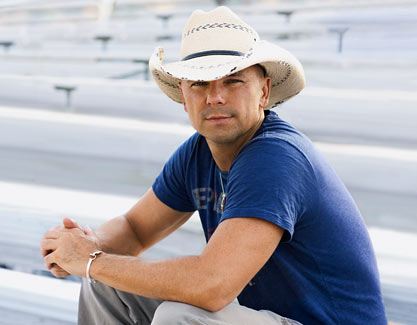 Singer-songwriter Kenny Chesney scores his 23rd # 1 single this week with “Reality,” which he co-wrote with longtime writing partner and friend Brett James. Their previous collaborations include the chart-topping “Out Last Night,” the Top 10 “Keg In The Closet,” and “Spirit of A Storm,” from Chesney’s introspective ‘Lucky Old Sun’ album.

The idea for “Reality” was born in a dentist’s chair. Chesney says, “I was lying in the chair, I had the mask on, you know, where they give you that funny gas, so they can work on your mouth without you feeling it, and I remember thinking, ‘Wow, I haven’t been this relaxed in a long time.’ That was my escape from reality and that’s what the song is about. And when people come to our shows, they’re not thinking about what’s going on in their job or school, they’re having fun, escaping reality and I’m glad to be a part of that. I say it every night on stage we all got problems but for the next couple of hours, let’s push them aside and relax. That’s how I feel about it!”

On June 2, The ‘Brothers of the Sun’ Tour starring, Chesney and Tim McGraw, kicks off in Tampa, FL. The tour marks the first time in 10 years the longtime friends have hit the road together and features Grace Potter & The Nocturnals and Jake Owen. The tour will play stadiums across the country and are the only cities and venues Chesney will play in 2012.  For a full list of ‘Brothers of the Sun’ Tour Dates, please click HERE.