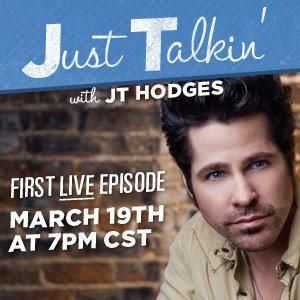 On March 19th at 7:00 pm CT, JT Hodges will premiere a web series called “Just Talkin’”.  The twice monthly online chat with Hodges will give fans a chance to get to know the new artist a bit better, and also hear him perform some of his own music as well as fan-voted cover songs.  Fans are able to vote for their favorite songs via a Facebook poll and can cast votes now by clicking HERE.

Hodges’ new single, “Goodbyes Made You Mine,” is rapidly closing in on the Top 40 of the Music Charts since its Valentine’s Day release. In his Music Row review of the single, respected music critic Robert K. Oermann  said, “this has a certain ‘presence.’ JT’s not only a solid writer, but his vocal performance is up-close and personal, packed with personality and exuding confidence. The deep-twang guitar and driving production are also pluses. A star is born.”

Hodges burst onto the country music scene in 2011 with the release of his debut single, “Hunt You Down,” and a slot on Toby Keith’s Locked & Loaded Tour Presented By Ford F-Series. “Goodbyes Made You Mine” is the second single from the artist’s soon to be released CD.