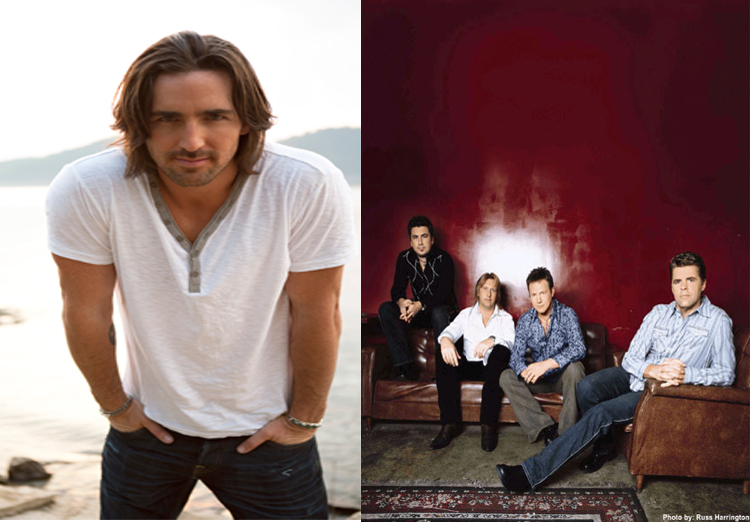 The Pendelton Roundup in Pendleton, OR is one of the ten largest rodeos in the world with an exciting and wild night pagent and is held annually the second full week in September. The 2012 Pendleton Round-Up and Happy Canyon Concert won’t feature the normal opener and headliner format. Instead, two award-winning country artists will take the stage. Jake Owen, 2009′s Top New Male Recording Artist for the Academy of Country Music, and Lonestar, on a reunion tour with original lead singer Richie McDonald, will have equal billing at the event in Happy Canyon Arena on Sept. 8.

Both the Round-Up Association and the Happy Canyon Company are excited about the two headliners.

“It is nice to be able to bring a couple of great concert acts in to Pendleton this September,” Happy Canyon President Bob Rosselle said. “The Round-Up and Happy Canyon boards are very excited to bring in the caliber of a 20-year award-winning legend in Lonestar with their lead singer back on board and a chart-topping up-and-comer like Jake Owen. These bands are sure to please all that can attend. We look forward to providing a great event to start off our wild week.”

“Once again Happy Canyon and the Pendleton Round-Up Association are bringing two of the best country acts in the country to Pendleton,” Round-Up President Dennis Hunt said. “We hope the community will come out and support us.”

Lonestar is celebrating its 20th anniversary with a reunion tour that marks the return of original lead vocalist Richie McDowell. Also as part of the reunion, the band will be recording a new album together. If their earlier recordings are any sign, that new release will be a big hit.

“Five years has come and gone since I left Lonestar,” McDonald said of the reunion. “We’ve all tried other avenues and the fact remains that some things were just meant to be. I miss those crazy nights running around on stage making music with my band of brothers.”

McDonald will be running around on stage in Pendleton with that band of brothers — keyboardist Dean Sams, drummer, Keech Rainwater and lead guitarist Michael Britt.  The band has issued a joint statement saying the members are excited to celebrate their 20th anniversary, open a new chapter and record a new album.

Jake Owen became a star so quickly that he says he didn’t have time to memorize any country music rule book — which made it easier to toss it out the window. When he was on the Florida State University golf team he severely injured his shoulder. During his recuperation, he decided to learn to play guitar. He enjoyed success with “Startin’ with Me,” “Don’t Think I Can’t Love You” and “Eight Second Ride.” He was nominated for Grammy and Country Music Academy awards for his revival of “Live in a Northern Town” with Sugarland and Little Big Town.

Now he’s rewriting the rule book with Barefoot Blue Jean Night. The title track from that album has already hit number one on the charts. In the past he depended on his own songwriting, but with his new album he went out to find songs from other composers.

“I got to pick songs from this amazing community of writers, and I’d never done that before,” he said. “I’d written everything because I felt like that was expected of me. On this record, I wanted to include the incredibly talented writers in this town.”

From singing in country bars in Florida in 2005, Owen has come a long way. That doesn’t mean he’s about to rest on his laurels, however.  “If you want to get better at your craft, you have to push yourself, take risks and try something different,” he said. “In order to grow and not be complacent, you have to open your mind, expand your horizons and be grateful.”