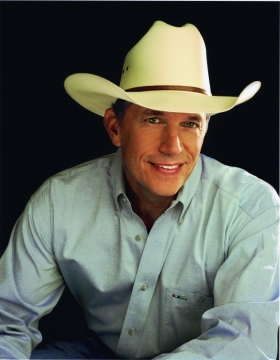 George Strait does it again! His current single “Love’s Gonna Make It Alright” off his latest CD HERE FOR A GOOD TIME lands the Number One spot this week on mediabase radio chart.  This feat ironically marks his 59th career number one hit for the 59 year old country music superstar – one per year of his life!  “Love’s Gonna Make It Alright” written by Al Anderson and Chris Stapleton is one of the few Strait did not write with son Bubba and longtime pal Dean Dillon for this album .

“You know, I’ve always thought that whether I’m writing or not, I’ve gotta pick the best songs, whether or not they’re mine,” says Strait.  “I’m not gonna sing ‘em just because I wrote ‘em. I’ve gotta find the best songs to make the best record I can. I think all of these songs deserve to be on the record.”

Here For A Good Time, debuted at Number One on the Billboard Country Album Charts  (his 3rd number one album debut in a row) and #3 on Billboard Top 200 Chart (behind Lil Wayne & Adele).  Strait co-produced this album with his long-time friend and legendary producer Tony Brown at Shrimpboat Sound Studio in Key West, FL – the same studio where Strait recorded his last three award-winning albums. The Country Music Hall of Famer co-wrote seven of the album’s 11 tracks with his son Bubba and legendary songwriter Dean Dillon.

With a career spanning more than 30 years, George Strait has the most number one singles of any artist in history including Elvis.  He has sold nearly 69 million records and with 33 different platinum or multi-platinum albums has the most RIAA platinum certifications in country music and the third in all genres, behind The Beatles and Elvis Presley. Strait was inducted into the Country Music Hall of Fame in 2006.

George Strait is the only artist who has had 85 out of 90 radio singles make it to Top 10 and 24 albums at the number one position on Billboard’s Country Music Album Chart – George Strait.

For more information on George, visit his official site www.georgestrait.com.