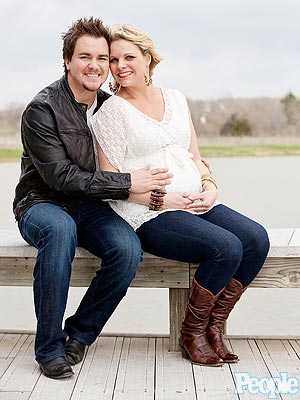 Eli Young Band’s lead singer, Mike Eli, just shared exclusively with PEOPLE that he & his wife are expecting their first baby this summer. Mike & his wife Kacey found out they were pregnant on New Year’s Day and they are expecting the arrival of their little girl on August 2nd.  Mike shares with PEOPLE that he has been reading up on his new role as a dad.

“She and her mom got me a couple books that I am reading, and it can be a little overwhelming,” he admits.  “I recommend reading them for the basics and what to expect during pregnancy, but they can’t teach you to be a good dad and a good partner. That’s up to me to figure out.”

Mike has been on the road a lot lately, including a recent trip to Australia.  Being on the road is already starting to be difficult for him.  “We’ve been on the road so much for so long, and we like it, we love playing shows, but I think all four of us agree, now that we’re all married, the urge to get home is a lot stronger than it ever has been,” he explains.  “Now that Kacey’s pregnant it’s even stronger, and I can only imagine what it will be like once the baby is born. It will be extremely hard to leave them.”

Eli Young Band will be in Vegas this coming weekend for the 47th Annual Academy of Country Music Awards in which they are nominated for THREE ACM Awards! Be sure to tune-in on Sunday April 1 at 8pm on CBS.