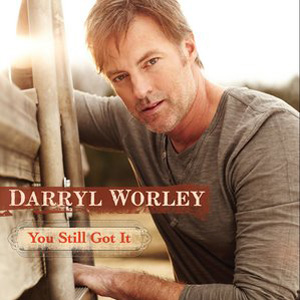 One of country music’s greatest singer-songwriters, Darryl Worley, is gearing up for the release of a brand new single titled “You Still Got It.” The upbeat tune will have listeners singing along to the song’s sexy lyrics in no time, as they remember why Worley is considered a staple within the country music scene.

“You Still Got It,” co-written by Worley and Brett Jones, is the singer’s first single to impact country radio in nearly two years. The song will be a sure fire hit with the ladies, as it talks about how even after all the years of being together, she still has what it takes to turn him on.

“I went to Brett’s house one day and he played me the chorus,” Worley recalls of writing the song. “I said, ‘That’s a hit!’ It sounded like it had been around for 25 years, and I knew a song with that kind of classic feel was a no-brainer. It’s got a really cool dance groove and it’s got that thing that makes women love it. That’s always a positive thing.”

The tune is just a taste of what is still to come from Worley, as he recently inked a new record deal with Tenacity Records/Crazytown Records. His highly-anticipated new album, One Time Around, is tentatively slated for release in June.

Worley has become a household name with his 20 charted hit singles, including “A Good Day to Run,” “I Miss My Friend,” “Have You Forgotten,” “Awful, Beautiful Life” and “Sounds Like Life to Me,” among others. Throughout his career, he has been a mainstay of modern country music by remaining true to himself and not following trends or fads. As a distinctive singer and first-rate songwriter, Worley has made an impact on the American public and country music that only legends are capable of doing.

“You Still Got It” is set to hit country radio on March 19 with a music video to follow in the coming weeks. For all the latest news and information on Darryl Worley, including current news and tour dates, visit his official website at www.darrylworley.com.