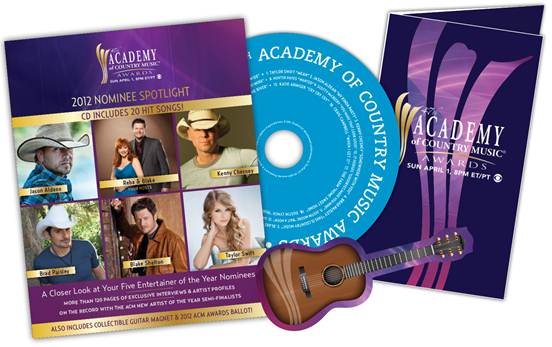 The Academy of Country Music and ‘ZinePak are proud to announce the release of the 47th Annual ACM Awards Spotlight ‘ZinePak, a limited-edition package spotlighting 2012’s biggest nominees and brightest new stars.  The collection pairs a 120-page magazine with a 20-song CD.  It also includes a ballot with this year’s ACM Awards nominees and a collectible ACM magnet. The ‘ZinePak is available at Walmart stores nationwide and Walmart.com on March 20, leading up to the LIVE broadcast of the 47th Annual Academy of Country Music Awards on Sunday, April 1, 2012 at 8:00 PM ET/delayed PT on the CBS Television Network.  The Limited-Edition Package sells for $7.

The 120-page magazine includes exclusive interviews with and profiles of more than 30 country stars. It also gives fans an inside look at the Academy, including the history behind the organization and the Awards, some of the most decorated artists in its history, and the important social and philanthropic activities happening year-round tied to ACM Lifting Lives.  The package also includes a ballot for fans to choose their picks in each category ahead of the Awards broadcast on April 1, an ACM magnet, and a coupon for a FREE (up to $1.50) 2-liter of Dr Pepper TEN.

Thanks to our friends at the Academy of Country Music, we have TWO Limited-Edition 47th Annual ACM Awards Spotlight ‘ZinePaks to give away!!  Two winners will be randomly selected after contest closes on April 1.  To enter to win, please fill out the form below.  One Entry Per Person.  Good Luck!
Please select a valid form

The track listing for the collection is as follows:

The package will be available at Walmart stores nationwide beginning March 20 and at Walmart.com. Production will be limited to fewer than 45,000 copies.  Get your copy while you can, these will go FAST!!!!

The Academy of Country Music Awards ceremony, which honors country music’s top talent as well as the industry’s hottest emerging artists, is produced for television by dick clark productions and will be broadcast LIVE from the MGM Grand Garden Arena in Las Vegas on Sunday, April 1, 2012 at 8:00 PM live ET/delayed PT on the CBS Television Network.