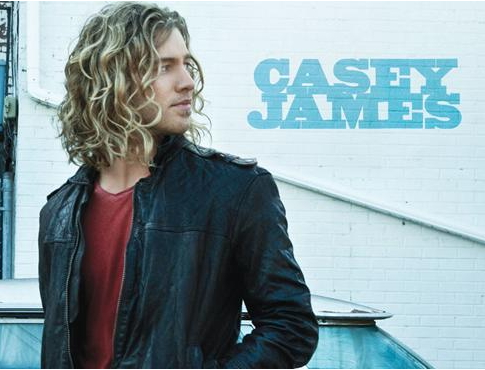 For Casey James, years of playing in bars, endlessly practicing his guitar and honing his writing skills is culminating the release of his self titled, 19 Recordings/BNA Records debut album on March 20. “My heart gets fluttery thinking about it,” admits the Cool, TX native. “All my life, I’ve wanted to get an album in stores. It will be a huge day.” Casey will spend the week crisscrossing the country with performances that include a visit to The Ellen DeGeneres Show where he will perform his Top 30 single, “Let’s Don’t Call It A Night.” The show airs on March 21.

For Casey, the realization of his dream to release an album has been years in the making. “I’m almost 30 years old and have been working for more than 12 years, at least 4 or 5 hours a night, every night at any place that would let me in the door and play,” says James. “I actually sang before I talked. My dad sang to me before I was born so it was just something that was always in my blood and my heart,” he continued.

But it was a third place finish on season 9 of American Idol that set his career in fast forward. “It’s given me the exposure that I worked 12 years to get in every local bar, restaurant and private party,” said Casey. “There’s the saying, ‘a 10 year overnight success,’ and that’s what the show did for me.  It was a great experience all the way around.”

Casey co-wrote 9 of the 11 songs on the album including the first single. He collaborated with some of the top writers in Nashville including Terry McBride, Chris Lindsey, Bob DiPiero, and Brett James. Of writing with those talents, he says, “I’ve learned a lot.  These guys are the titans of the writing world, and just the fact that they would agree to meet with me was amazing.”

In addition to writing most of the album, Casey co-produced the album with Chris Lindsey and played guitar on all the tracks. “I love to play. It’s my passion,” said Casey. He picked different guitars for different moods, and on “Let’s Don’t Call It A Night,” he played two different guitars. “The very first lead part is on a Telecaster, and then the end is on a Stratocaster, just because I felt like the end needed to be more sexy. And where Strat says sexy to me, Telecaster says country.” “Why not both, right?”

Casey James is available at retail and all digital providers on March 20. Each day, March 10th – March 20th visit www.CaseyJamesOfficial.com to find out where you can stream exclusive premiers of each track from Casey’s new album and enter to win a trip to American Idol!