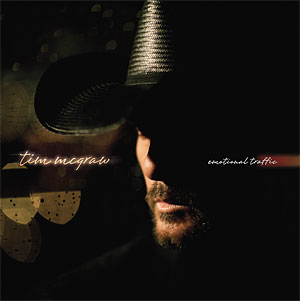 Country music superstar Tim McGraw’s 11th studio album EMOTIONAL TRAFFIC debuted at No. one this week on the Billboard Country Chart, making it his 13th career No. one debut.

“The most beautiful thing about this No. one debut, over the others, is that it was driven by the fans and their eagerness to finally have this music in their hands,” said McGraw.  “The fans don’t care about the business side of things…they just want the artists they follow to keep putting out great songs, and I think we have delivered some of the best songs of my career on Emotional Traffic. The reaction to the album makes me even more excited to get back on the road this summer on the ‘Brothers of the Sun’ tour.”

Critics have also chimed in with support for the new disc. Rolling Stone said, “His 11th LP is his most assured, with a dozen sharp songs about middle-American struggles.”  While the Associated Press added, “McGraw continues to expand country music’s boundaries. That’s why, 20 years into his career, his music still sounds so fresh...”

Tim McGraw has sold over 40 million albums and dominated the charts with 32 No. one singles. He’s won three GRAMMY® Awards, 14 Academy of Country Music Awards, 11 Country Music Association Awards, 10 American Music Awards, three People’s Choice Awards and numerous other honors. With 7.8 million spins at radio, McGraw was deemed “Artist of the Decade” (2000-2010) by Nielsen Broadcast Data Systems.  His current single, “Better Than I Used To Be,” continues to steadily climb the charts.

This June, McGraw will kick off what is anticipated to be the biggest stadium tour in country music history with old friend Kenny Chesney.  The ‘Brothers of the Sun’ Tour will reunite McGraw and Chesney for the first time in 10 years.  The 20-city tour kicks off on June 2 in Tampa and will hit the nation’s biggest stadiums through August.

Next up on McGraw’s schedule is an Australian arena tour with wife Faith Hill.  For more information and a full list of tour dates, visit www.timmcgraw.com.