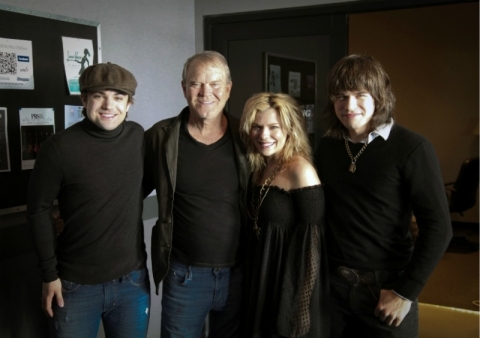 The Band Perry received a flurry of press following their performance with Glen Campbell at the 54th Annual Grammy Awards this past Sunday night but perhaps the real story for them happened off- stage.   It was their very first Grammy nomination and performance. That performance inspired an intersection of two generations, that of Campbell’s and the new fans that The Band Perry is bringing to the country music format.

The group garnered a nomination in the “Best New Artist” category and was asked to join the historic tribute to Campbell, which also included country star Blake Shelton and Campbell himself.  Campbell, who recently revealed he has been diagnosed with Alzheimer’s, just released his final studio album and will also complete his final live tour this year. The performance on the CBS broadcast of the Grammy Awards was also quite possibly the legend’s final television appearance as well.

“We are so honored to have been a part of the tribute to Glen Campbell,” says Kimberly Perry. “It was special in so many ways. Our parents have always been big fans and they introduced us to his music in our early years. Our performance with him was such an amazing crossroads between our parent’s generation and ours. His timeless songs and talent have truly left a legacy that will continue to inspire new artists and new fans alike.”

“Performing in such a historical moment is something that we will remember forever. We grew up listening to songs like “Gentle on My Mind” and then to be able to perform it as a tribute to the man himself was just incredible,” says Reid Perry.

“It was not only special to perform with Glen Campbell but also with his band. We are a family band and his family is also in his band, his children are part of the group. We really felt like everything had come full circle for us. They made us feel so comfortable and part of the family,” comments Neil Perry.

The Band Perry’s appeal far reaches that of the usual country music format. Their roots-inspired contemporary sound has garnered fans from all over the world.  They are bringing a younger demographic to the country music format and they are doing it with pride.

The Band Perry’s current single “All Your Life” tops the country radio charts for a second week in the coveted #1 spot and also recently garnered RIAA GOLD sales status.

Keep up with Kimberly, Reid & Neil by visiting their official website www.thebandperry.com.