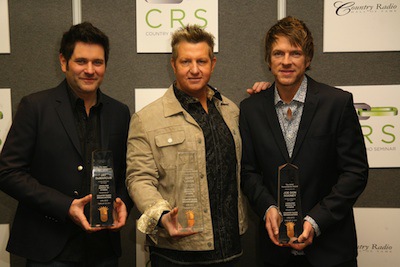 The members of Rascal Flatts- Gary LeVox, Jay DeMarcus & Joe Don Rooney- were honored this morning as they were awarded with the CRS 2012 Artist Humanitarian Award at the opening session of Country Radio Seminar being held in Nashville this week.

“It’s a little uncomfortable to be recognized for something we feel we should be doing,” remarked Jay DeMarcus after the band received their award on stage. “We have been so blessed with an amazing career, to pay the blessings forward seemed the most natural thing to do.”

The honor was bestowed on behalf of their charitable endeavors with the American Red Cross, The Jason Foundation and Make-A-Wish as well as their continued contributions to the Monroe Carell Jr Children’s Hospital at Vanderbilt in Nashville, Tenn.