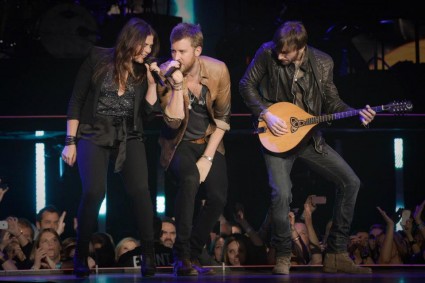 GRAMMY winning trio Lady Antebellum capped off the opening weekend of their OWN THE NIGHT 2012 WORLD TOUR sponsored by GAC on Sunday by setting an all-time venue attendance record at Bloomington, IL’s U.S. Cellular Coliseum, breaking the previous record held by superstar Kenny Chesney.  More than 32,000 fans packed arenas this weekend for the first three dates of the tour.

“Opening weekend was more than we ever could have dreamed,” said Lady A’s Charles Kelley.  “There’s been so much anticipation and nervous excitement leading up to our first big arena tour. So much work and preparation goes into putting it together, and then you have to let go and just hope the fans show up.   They didn’t let us down!   We’re honestly blown away.”

The OWN THE NIGHT 2012 WORLD TOUR sponsored by GAC sold more than half a million tickets in advance of its first stop last Friday in Tulsa, OK.  The tour continues this Friday in Huntington, WV and runs through June with Darius Rucker and special guest Thompson Square.

Additionally, Lady A recently scored five nominations for the 47th Annual ACM Awards in the categories of Vocal Group of the Year, Album of the Year for OWN THE NIGHT as both songwriters and producers, and Song of the Year and Video of the Year for Just A Kiss.  The show airs live from Las Vegas on CBS Sun., April 1.

For more information and a list of tour dates, please visit www.ladyantebellum.com.