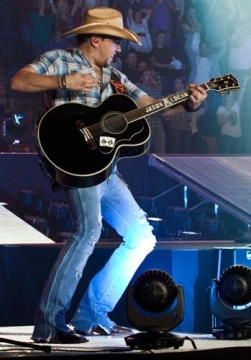 It took just four minutes for ACM Entertainer of the Year nominee Jason Aldean to sell out his May 19 show at Atlanta, GA’s Aaron’s Amphitheatre at Lakewood this morning.  A second show has been announced at Lakewood on Fri., May 18 that will go on sale next Fri., Feb. 24 at 10am ET. Tickets for this and all 2012 MY KINDA PARTY TOUR dates can be purchased online at www.livenation.com and Ticketmaster charge by phone at 1-800-745-3000.

“It feels like 2011 was sort of my coming out year, but this is a milestone I’ve been working toward for over a decade,” said Aldean.  “From the days when my mom used to drive me all over Georgia and I was playing clubs for 20 people my dream was always to play for 20,000.  Big shout out to all my peeps in Georgia for throwing me such a big coming home party!”

A Macon, GA native, Aldean has sold more than six million copies of his four studio albums and topped the charts with eight No. one songs.  His current single, “Fly Over States,” is climbing up the Top 25 at country radio and follows in the footsteps of four consecutive No. one singles off his DOUBLE PLATINUM album MY KINDA PARTY.  The reigning CMA Album of the Year, MY KINDA PARTY was the top-selling country album of 2011 and the No. five best-seller in all genres.

For a full list of appearances and upcoming tour dates, visit www.jasonaldean.com.