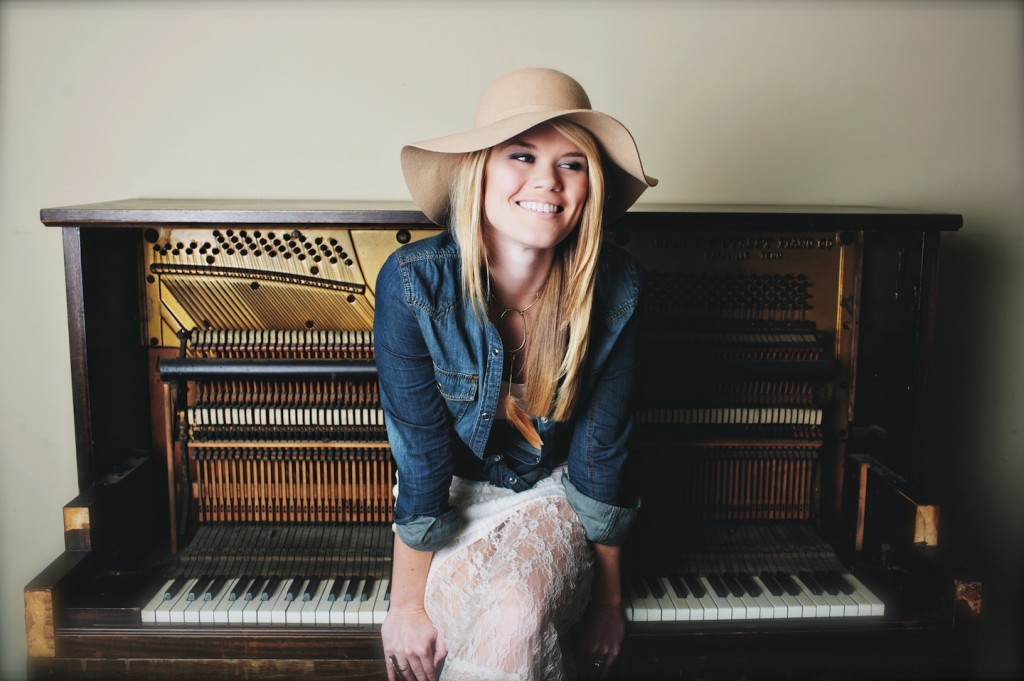 Monday night, Nashville-based, singer-songwriter Nicolle Galyon debuted on NBC’s The Voice, singing her rendition of Kenny Chesney‘s “You Save Me.”   Within seconds, judge Adam Levine of Maroon 5 turned his chair around, selecting Nicolle for Team Adam.  His excitement over her performance even prompted him to proclaim that “when you weren’t nervous, you were so special” and that his fellow judges “were sleeping at the wheel.”

Nicolle is a Belmont University graduate and Warner Nashville songwriter who, ironically, has penned songs for American Idol’s Lauren Alaina as well as Josh Kelley and Brent Anderson.

Nicolle is putting a new spin on Country music by pairing her Country vocal chops with her classical piano skills.

Nicolle Galyon grew up in Sterling, Kansas, a town of 2,000 people “smack dab in the middle of nowhere.”  At the age of four, Galyon began mimicking the older kids at her babysitter’s house who were taking piano lessons and began classical training at age five. From there she persistently pursued piano competitions until the age of 18. Upon graduation from high school, Galyon moved to Nashville to pursue a career behind the scenes of the music business, as she “didn’t think there was anything I could do with classical piano training in country music”.

Shortly after her move to Music City, Galyon enrolled in Belmont University’s Music Business program and started secretly writing songs in the practice rooms at the school, as she was too timid to sing them in front of other people. But upon a friend’s request, she entered a few of her songs into the Songwriter’s Showcase Series at Belmont and landed a spot playing on the University’s biggest stage and biggest yearly event, The Best Of The Best. “I had never sung in front of anyone at that point in my life,” Nicolle remembers.  “I thought there’s only one way to dive into this, and that’s headfirst. Here goes nothin’.”

That night parlayed Galyon into other writer’s rounds and soon after graduation she signed a publishing deal with Warner Music Nashville, where she has been a staff songwriter since 2007. In that time, she has had songs recorded by American Idol runner-up Lauren Alaina, Universal Recording artist Josh Kelley, newest Sony/Seagayle signing Brent Anderson, in addition to several other television placements.

But along the way, Galyon found that her love for music did not just stop for writing. Through the process of writing, recording and performing her songs, she found that hearing other people sing her words wasn’t completely fulfilling and that her desire to tell her own story was the ultimate dream. In 2012 she auditioned for NBC’s hit singing competition, The Voice.

“I’m finding my voice in front of all of America”, Galyon says. “My fear of failure has become less than my love for music.”

Galyon’s songs are a marriage of piano-based, pop melodies mixed with charming, sophisticated, and endearing lyrics about Middle America. “A lot of people ask me why I don’t just do pop music since I’m a piano player. And I tell them that as long as I’m writing what I know, I will always be a country artist,” says Galyon. “You can’t take the small town outta the girl, no matter how much time she spends in LA or Nashville. And at the end of the day, I just want to be authentic. As long as I’m being genuine, my songs will be country. No matter what instrument I’m playing.”

Keep up with Nicolle and her new venture on NBC’s The Voice by visiting her official website, www.NicolleGalyon.com.