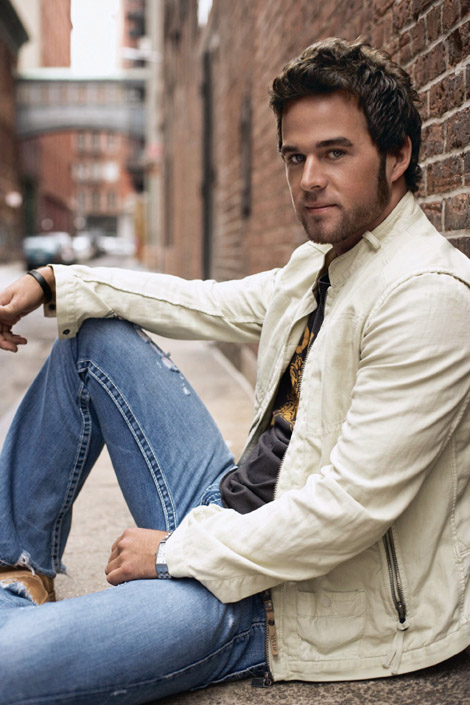 With the decidedly gospel honk of “Grandpa’s Farm” still swirling in the air, relative newcomer David Nail saw most of the assembled radio and media attendees at the prestigious Country Radio Seminar New Faces showcase rise to their feet following the power-vocalist’s four-song set. Ten years into a career that has just yielded his first #1 – the 48-week-to-the-top record-setting “Let It Rain” – David Nail reaffirms people’s faith in the power of music played for the songs and vocalists who lean into the emotion, not just the technique.

“You have so much to prove,” said the Kennett, Missourian, covered with sweat backstage, “and so little time to do it. You know those people have seen the best of everything this genre has to offer all week. You know they’re tired. They’ve been at it for several days and you’ve got four songs, which isn’t a lot. You know they’re looking to see what country music’s future might hold. Being the last music they were going to see, I didn’t want to hold anything back.”

After a brief video offering heartfelt thanks to country radio for believing in him “even when it didn’t always make any sense,” Nail took the stage with the title track to The Sound of A Million Dreams, which is also his next single. The song, about the impact of songs on one’s life (especially songs on the radio), made for a striking acoustic open, suggesting nuance is as affecting as a full-on band. He then went for his almost Top 5, “Red Light,” and the longest-run-to-Number-One, “Let It Rain.”

Earlier in the week, the band director’s son also inspired rapt attention at the hallowed Ryman Auditorium for the Universal Music Group show with the profession “I labor for hours, ‘cause I know the power of a song when a song hits you right,” from “The Sound of a Million Dreams.” The piano/vocal performance used intimacy to create a universal bond, prompting Music Row’s Robert K. Oermann to write, “Of the company’s more established artists, the finest performance came from David Nail. He blew the roof off the Ryman when he sang last year, and he repeated the feat on Wednesday when he sang his so-powerful “The Sound of a Million Dreams.” In a word, ‘Wow.’”

“More than any song I’ve been blessed with, this is everything I am,” said Nail of his next single. “So much life gets frozen in the songs you’re hearing while you’re living, and all you have to hear – no matter where you are or what you’re doing – is a few notes and it all comes alive right there.”

And in the spirit of song that is so much how Nail lives his life, the Grammy-nominated vocalist literally walked offstage, got on his bus and headed to Detroit, Michigan to fill in for Thompson Square on Lady Antebellum’s tour this weekend. With Thompson Square’s Shawna Thompson’s father passing away Thursday evening, Nail was happy to fill in the gap for two sets for his friends.

“I really think of this as a family,” Nail explained. “I know any of them would do it for me, so it’s the least I can do: Step in, play music, and, of course, pray for Shawna, her Father and their family.”