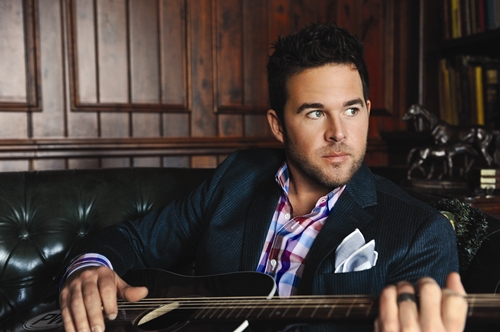 They say great songs last forever. Based on certifications over the last week, David Nail is living proof of that statement. Both his breakthrough single, “Red Light,” and “Let It Rain,” the record-setting #1 from his sophomore album, The Sound Of A Million Dreams, have been certified GOLD by the RIAA for over a half million downloads each. With “Let It Rain” spending over 48 weeks climbing to the top of the country charts, the slow build has seen both songs benefiting from the extended rise.

“It was funny to see ‘Red Light’ starting to pick up downloads again,” Nail says of his double certification, “but I think when people heard or bought ‘Let It Rain,’ they went back and found it. It makes me feel good that the songs I’ve recorded have staying power. It’s not just about being a hit, but it’s the moments the songs contain being kind of timeless.”

For the Kennett, Missourian band director’s son, finding songs that are built to last has been a mission since arriving in Nashville almost a decade ago. If it means the climb is slower, Nail is okay with it… as long as it feels like he’s building a career on solid music.

Certainly it’s being reflected on the road. After a sold out and, in certain cases, beyond capacity run through the Midwest, he did breakout business at Florida’s annual Everglades City Seafood Festival. At the show, not only did the assembled fans know the hits, they sang along to every song from the Grammy-nominated vocalist’s two albums.

“When I started doing this, that’s what I dreamed of,” Nail admits. “The idea that these songs could be somebody else’s life, feelings, or reality… that’s what I was hoping for. You know, that’s what the songs I’ve loved the most have meant to me. They made me feel something. Hearing the people who’re coming out to the shows singing some of the songs that have never been singles, songs like ‘Catch You While I Can’ or ‘She Rides Away,’ that’s exactly what I hoped my music might do.”

For Nail, there’s a connection between what goes on in the studio – with stellar players like the Rolling Stones’ musical director Chuck Leavell, Mark Knopfler vet Glenn Worf and vocalists ranging from Lee Ann Womack and Miranda Lambert to indie rock’s Will Hoge – and the stage. As he explains, “Truly great songs let the band spread out and really allow those melodies to take the fans to a different place. That’s where these songs truly come alive.”

The Los Angeles Times concurs, acknowledging his latest album, The Sound of a Million Dreams, is built on “songs that chip away at loss, regrets, missteps and other human failings… grist for the richest life lessons, Nail seems eager to take on real life,” while the Associated Press observed, Nail has “a soulful voice custom-made for heart-tugging narratives… At a time when country overflows with macho bluster and vocal overkill, Nail is a restrained romantic.”

With a pair of gold certifications for his two breakout hits, Dreams being named one of Billboard’s Top 10 Country Albums of 2011, and both a 2010 Grammy and Academy of Country Music nomination, David Nail’s path slightly less taken seems to be gaining traffic. Meanwhile, Nail remains on the road, taking his kind of soul country to the people anywhere they want to hear him sing.

Keep up with David by visiting his official website, www.DavidNail.com.