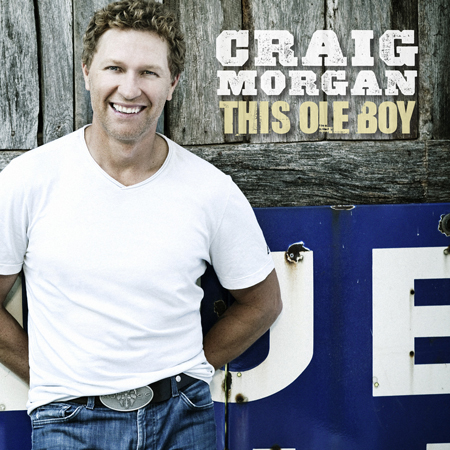 Craig Morgan is gearing up to release his sixth studio album, This Ole Boy, on February 28.  This album serves as his first on his new label home, Black River Entertainment, as well as new music from Craig in nearly three years.  Morgan co-produced the album as well as co-wrote 6 of the 12 songs.

The album has a strong start with his current hit single & album titled song “This Ole Boy”.  The upbeat, feel good tune is a great beginning to the album and sets the tone for what is to come. “More Trucks Than Cars” serves as an anthem to the country life and will make for a great single to hear on country radio.  Morgan showcases his strong vocals on“Whole World Needs A Kitchen”.  With lyrics such as “The whole world needs a kitchen, like the one we lived in, the smell of supper on the stove, food for the soul & a taste of mama’s wisdom….”, the song speaks volumes as it is full of values & meaning.  Craig rocks it with “Show Me Your Tattoo”.  The song is sure to be a hit during his live concerts as fans will be singing right along with him trying to find out if the tattoo is a “butterfly, ladybug, a cross, a rose, a peace symbol, devil’s horns, angel’s wings, or little symbols in Chinese???”  “I Didn’t Drink” is another powerful song by Morgan.  Craig’s delivery is compelling & strong as he sings about a man grieving for the loss of his wife.  “Corn Star”, not to be confused with another type of “star” is about a girl that is the FFA & 4H Queen as well as every country boy’s dream.  The song is fun & upbeat and will quickly become a fan favorite, especially during a live performance.  All twelve tracks on the album standout with their own story, making the album fulfilling from start to finish.

This Ole Boy is full of top-notch, quality country music.  Craig delivers music that represents his patriotism, family values & sense of humor as well as showcases his well-seasoned rich voice.  This Ole Boy will be available in-stores on February 28 or you can pre-order your copy now at ThisOleBoy.com.