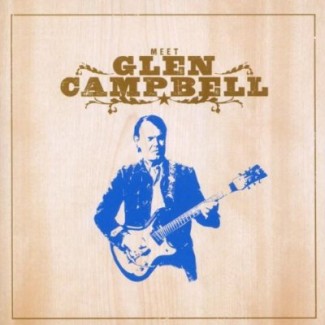 Glen Campbell’s critically acclaimed 2008 album, Meet Glen Campbell, has been expanded with exclusive bonus tracks for a special CD and digital edition was released February 7 by Capitol/EMI.  Campbell was honored with The Recording Academy’s Lifetime Achievement Award on February 11.

Upon its original release in August 2008, Meet Glen Campbell was met with worldwide critical praise, and Campbell promoted the album with interviews and performances for a broad spectrum of media, including an “AOL Sessions” concert.  Meet Glen Campbell’s expanded edition adds three performances from that concert (Campbell’s classic hits “Wichita Lineman” and “Rhinestone Cowboy,” and U2’s “All I Want Is You”), as well as 2008 remixes of “Gentle On My Mind” and “Galveston.”

“Glen Campbell is still on the line with a rocking new CD.” – USA Today

In a legendary music career that spans more than five decades, Glen Campbell has achieved chart-topping, platinum-selling pop and country success singing everyday tales of life, love, work, and heartache.  Campbell has been honored with five GRAMMY Awards and trophies for Male Vocalist Of The Year from both the Country Music Association (CMA) and the Academy Of Country Music (ACM).  In addition to being inducted into the CMA’s Hall Of Fame, he has been awarded its top Entertainer Of The Year honors, and the ACM has honored him with its prestigious Pioneer Award.

The influential singer, guitarist and stylist, who has long made others’ songs his own, did it again for Meet Glen Campbell, recording high-spirited, emotionally charged versions of tracks that have personally moved and inspired him.  A true musician’s musician, Campbell’s distinct guitar playing, along with the clarity and emotion of his powerful vocal performance, come together to give new life to the songs he selected for Meet Glen Campbell.

Campbell’s intimate performances convey an autobiographical and deeply personal connection to the album’s songs, which include Travis’ “Sing,” Tom Petty’s “Angel Dream” and “Walls,” The Replacements’ “Sadly Beautiful,” U2’s “All I Want Is You,” The Velvet Underground’s “Jesus,” and Jackson Browne’s “These Days,” among others.

“The Rhinestone Cowboy remains in strong, robust voice after all these years.” – People

Keep up to date with Glen by visiting his official website, www.glencampbellshow.com

We have a copy of Meet Glen Campbell to give away to one lucky winner!!  Fill out the form below and a winner will be randomly chosen after contest closes on February 24th.  One entry per person.  Good Luck!
Please select a valid form

One reply on “CONTEST: Enter To Win A Copy Of ‘Meet Glen Campbell’”