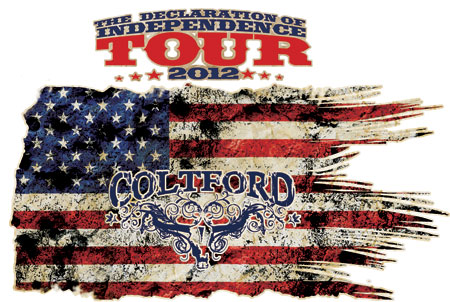 Average Joes Entertainment’s Colt Ford will kick off the first leg of his 2012 “Declaration of Independence” Tour beginning, April 6 in Albany, GA. Label mates The Lacs, JB and the Moonshine Band, Rehab and Lenny Cooper will open for Ford on the 20-city tour wrapping in Belvin, AR on June 9.

General admission tickets will go on sale February 15 and can be purchased through etix.com, as well as www.coltford.com. Additional tour dates will be announced at a later time.

To insure all ages can enjoy the show, family friendly zones have been created at the venues. “I have the most die-hard, rockin’ country music fans and they come in ALL ages,” explains Ford.  “When I look out in the crowds I see people anywhere from six to sixty years old. I really wanted to set up an all ages tour and create ‘family friendly’ zones to play for everyone that enjoys my music. This ‘Declaration of Independence’ tour will offer just that… fun for the whole family and then some!”

Ford is currently in the studio preparing his fourth studio album, Declaration of Independence, to be released from Average Joes Entertainment, May 2011. This highly-anticipated release is part of the Average Joes “Ultimate Trilogy” package and will be the last piece of the puzzle to conclude the collective story threading throughout the releases of JB and the Moonshine Band’s sophomore album, Beer For Breakfast, and The Lacs 190 Proof album.

General admission ticket packages start at $25. Fans who purchase pre-sale tickets will be sent an exclusive 4-song EP with never-before-released cuts from Colt Ford, The Lacs, JB and the Moonshine Band and Lenny Cooper. For more ticket information and tour packages, visit www.coltford.com