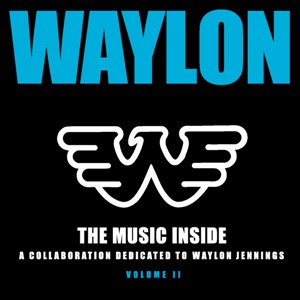 Average Joes Entertainment, in conjunction with Scatter Records, announced the official release date for The Music Inside:  A Collaboration Dedicated to Waylon Jennings, Volume II.  The album will be available for pre-sale purchase digitally on January 24, 2012, with availability at retail starting on February 7, 2012.

“I feel like this project could very likely break another sound barrier,” says Jessi Colter.  “Waylon was so original.  For his songs to be sang by other people and to take me somewhere else is not an easy task.”

Recording for the three volume series started over three-and-a-half years ago, and has been a labor of love for Jennings’ widow Jessi Colter; son Shooter Jennings; and guitarist Reggie Young. They, along with producer Witt Stewart, have assembled a star-studded roster of artists to pay tribute to Jennings and highlight his undeniable musical and cultural influence.

Colter adds, “I’ve been pleasantly surprised of the fact that the people involved chose to make the songs their own.  They add something to it and to me that’s what makes it interesting.  They made it their own because they could never walk in Waylon’s tracks.  They’d be stepping in holes.”

Waylon Jennings is recognized as one of the key players of country music’s ‘outlaw’ movement.  Jennings was in good company with fellow artists of his time including Johnny Cash, Willie Nelson, Merle Haggard and Kris Kristofferson.  They were the musical talents who defined a new genre of music with rebellious attitudes, which, in turn, translated over into their music.  The ‘outlaw’ rebellion denied Nashville’s straight-laced model and brought the era of whiskey-drinkin,’ bar brawlin,’ woman lovin,’ country music to the forefront.

The Music Inside:  A Collaboration Dedicated to Waylon Jennings, Volume I, was released last year and available now.

The Music Inside: A Collaboration Dedicated to Waylon Jennings, Volume II Track Listing: