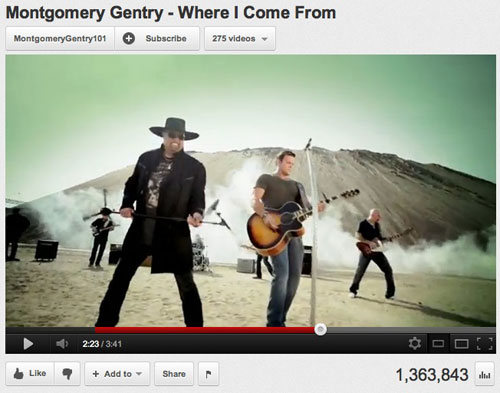 Montgomery Gentry’s music video for their latest single, which is #17 this week, is hitting the hearts of Americans with over 1.3 million views of “Where I Come From” and thousands of comments on the award-winning duo’s YouTube page. The powerful music video, shot from a deployed soldier’s viewpoint, is one of the most intense, influential videos ever done by the duo.

Directed by Potsy Ponciroli and produced by Chris Conner from Team Genius Productions, the video was shot in a California desert and a rock quarry in Nashville, TN.  Working closely with the video treatment, Eddie Montgomery and Troy Gentry wanted to honor the troops and the towns “where they come from.”  The video opens with a battlefield scene with a wounded soldier laying on the ground.  While his fellow soldiers try to rescue him, he is having flashbacks and memories of his beloved hometown.

“We’ve met many of our American Heroes along the way and they have always talked about how thinking of ‘where they come from’ is what motivates them in difficult times,” explains Eddie Montgomery. “It was important for us to make this video as close to real as we could.”

Troy Gentry adds, “We are really proud of this song and the music video. Just as our music is always about things we have seen or lived, the depth of this single is real.  We’re happy our friends are responding to it.”

“Where I Come From” is the lead single from Montgomery Gentry’s new album, Rebels On The Run, released on their new label home, Average Joe’s Entertainment.