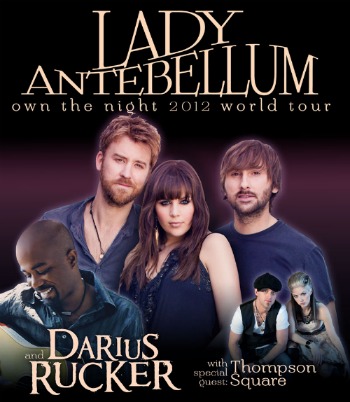 Reigning CMA and ACM Vocal Group of the Year Lady Antebellum has already sold more than half a million tickets for their upcoming OWN THE NIGHT 2012 WORLD TOUR, which kicks off this Fri., Jan. 27, in Tulsa, OK with Darius Rucker and special guest Thompson Square.

Advance sell-outs at some of the nation’s biggest arenas include the Staples Center in Los Angeles, Allstate Arena in Chicago, American Airlines Center in Dallas and the DCU Center in Worcester, MA to name a few.

“We have been really involved in the planning of our tour every step of the way…I remember drawing out an idea for our set design on a paper plate, so to now see it come to life is just crazy,” said Lady A’s Hillary Scott.  “We are just so invested in every moment and making it a great experience for the fans, and we’re really excited for everything 2012 has in store.”

“It has only been four years since we were driving around in Charles’ Jeep Cherokee and sharing a hotel room,” added Dave Haywood.  “This tour is what we’ve always dreamed of!”

The OWN THE NIGHT 2012 WORLD TOUR is an extension of last year’s critically acclaimed OWN THE NIGHT 2011 TOUR.  Of the show, the Sioux City Journal said, “They had some of the best staging we’ve seen in years. Songs flowed effortlessly; visuals enhanced just about everything,” while the Arizona Republic hailed the trio’s “impressive vocals and energetic stage presence.”

Fresh off celebrating their No. one hits “We Owned The Night” and “Just A Kiss” in Nashville this week, the trio’s third single “Dancin’ Away With My Heart” off their GRAMMY nominated, PLATINUM album OWN THE NIGHT has cracked the Top 20 on the country radio charts in just three weeks.

For a full list of upcoming tour dates and appearances, visit www.ladyantebellum.com.