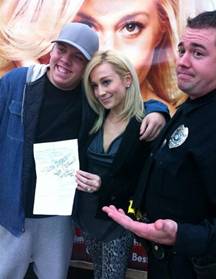 After making several TV appearances in both New York City and Los Angeles, including Good Morning America and The Ellen DeGeneres Show, last week to support the release of her latest album, 100 Proof, country music singer-songwriter Kellie Pickler headed south to Kennesaw, GA and Monroe, NC over the weekend to meet and sign copies of her new album for fans.

On Saturday, Kellie spent six hours at Best Buy in Kennesaw, GA meeting with her fans, taking photos and signing copies of her new album, 100 Proof. On Sunday, Pickler headed to Wal-Mart in Monroe, NC where hundreds of fans camped out all night just to get the chance to meet the NC native. Kellie spent over nine hours signing CDs and taking pictures with her home-state fans.

One fan was so eager to meet the country singer that he got his first speeding ticket on his way to meet Kellie. The cop who gave him the ticket showed up to Kellie’s signing and even posed for a picture with both Pickler and the guy who received the ticket. Kellie signed the kid’s ticket “Slow Down (or don’t get caught).”

Kellie is headed back to New York City this week as she’s set to perform on ABC’s “The View” on Wednesday, February 1.