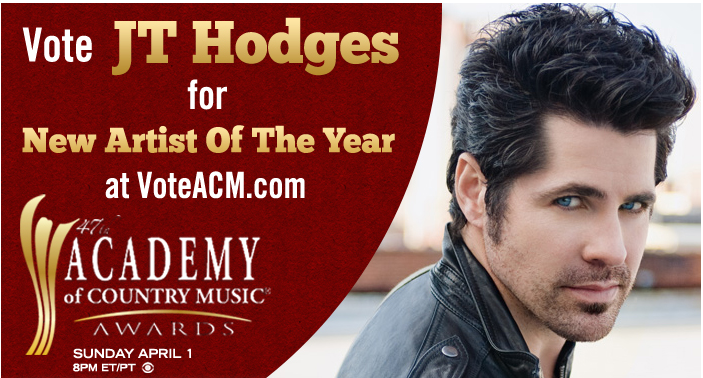 Show Dog Universal Music’s JT Hodges has released the latest in a series of campaign videos in his quest to become a final nominee in the ACM New Artist category. Hodges’ campaign slogan, “Who Is JT Hodges” is carried through and answered in this third video, also directed by Marcel.

“Working with Marcel on these videos has been a blast and I am so grateful to the country music fans for letting me give them a little peak into who I am,” Hodges said. “Our point was to just have some fun with these videos, and get everyone to smile a little bit.”

The eight semi-finalists for the ACM’s New Artist of the year were announced late last week. Voting kicked off on January 16th (www.VoteACM.com and www.GACTV.com/ACM) and will conclude at Noon ET on January 30th. The top three vote getters will compete for the prize, which will be announced during the broadcast LIVE from the MGM Grand Garden Arena in Las Vegas Sunday, April 1st, 2012 at 8:00 PM live ET/delayed PT on the CBS Television Network.

Besides the campaign video, Hodges also did a special fan exclusive video for his new single, “Goodbyes Made You Mine,” which can be seen HERE.  Catch the first two episodes of “Who Is JT Hodges” by clicking HERE & HERE.