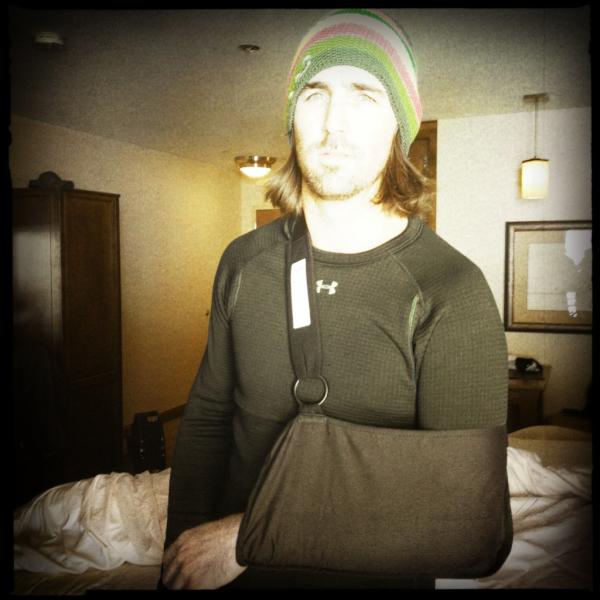 RCA recording artist Jake Owen definitely experienced some bad luck on Friday, January 13. Jake was snowboarding in Crested Butte, CO during the BMI Songwriter’s Festival when he hit a 17 inch ice block, took a spill and broke his collarbone.

After being rushed to the ER in Crested Butte, Jake tweeted, “Just broke my collarbone. Guess I charged this mountain a little too hard.”  In addition, Jake told Storme Warren, host of GAC’s Headline Country who was covering the event, “Man, it wasn’t like I was doing anything crazy. That’s why this is such a freak accident but the reality is if you’re not falling, you’re not learning.”

Unfortunately, that means recovery time and weeks of rehabilitation so Jake was forced to postpone his January shows. According to doctor’s orders from the Elite Sports Medicine and Orthopaedic Center, Jake is expected to make a full recovery. His progress during rehab will determine when he will be able to start performing again.  Jake says it will be sooner than later. “I’m so bummed that I have to postpone some shows but I promise you this, I’ll be back out on the road as soon as possible. I probably won’t be able to hold a guitar for a while but I can still perform.”

The last time Jake’s  shoulder was in a sling was life changing. When he was in college, he had a wake boarding accident which required reconstructive shoulder surgery. During rehabilitation, his left shoulder was in a sling and that is actually the time when he started playing guitar and writing songs. “If it weren’t for that wake boarding accident,” reflects Jake, “I might not even be a singer/songwriter today.” Jake is optimistic that something good will definitely come from this injury as well.

To see an interview with Jake in Crested Butte, CO prior to his accident, tune in to GAC’s Headline Country on Thursday, January 19 at 9 p.m. ET.

To learn more about Jake click HERE and also be sure to check out his official website www.JakeOwen.net.